Passionate, Professional: Dr. Cecil Gordon On The Side Of Swimmers

Passionate, Professional: Dr. Cecil Gordon On The Side Of Swimmers 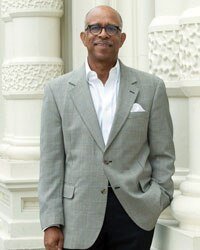 Whether he is standing on the deck of a competition pool or on the deck of an official’s boat in an open water race, Cecil Gordon M.D. always finds himself on the side of swimmers, both figuratively and literally.

The doctor from Delaware currently serves as the Chairman of the Board of Directors of USA Swimming, but has also volunteered for decades at local, national and international competitions, both in the pool and open water. His professional demeanor and well-suited charisma suits him well for his role as one of the top pool and open water swimming officials in the world.

His demonstrated objectivity, composure, and depth of knowledge of swimming – both in the pool and open water – are some of the reasons why he was selected to be the starter at the 2016 Rio Olympic Games and the 2015 Kazan FINA World Championships.

“I was excited and very proud [to be selected],” Gordon recalled. “To me, [the Olympics] is officiating at the Super Bowl, the World Series or the World Cup. This reaffirms a lot of hard work and is chance to not only enjoy the competition but to be a part of it as well.

It is the Olympics, so there are always going to be butterflies, but I don’t feel overwhelmed by the situation. I am prepared for it and will be even more ready for it when that time comes.”

His volunteer roles at the FINA World Championships and Olympic Games was literally a lifetime in coming.

He was initially drawn to competitive aquatics when his children got involved in swimming. He spent decades traveling around the U.S. working as a volunteer, and proving his skills from local swim meets to the highest echelon in the sport of pool and open water swimming. Dr. Gordon described his officiating career:

Daily News of Open Water Swimming: When did you first get involved in officiating?
Dr. Gordon: My interest in swimming developed when my children began to compete competitively. I began officiating around 2001 or so. My son, Clifton, is at the University of North Carolina as a member of the swim team. My daughter Cecily also swims at Georgetown University.

Daily News of Open Water Swimming: When did you first get interested in open water?
Dr. Gordon: In 2007 at my first meet in Indianapolis. Initially, I went to my first open water competition between pool competitions. The open water competition was held on Sunday, which was the off day between the the Senior Nationals and Junior Nationals that summer. I was looking for something to do and thought I’d give it a try. As a kid growing up in North Carolina, hunting and fishing were always activities I enjoyed with my father and grandfather. So being outside on a lake in a boat was natural for me. I’ve been hooked and have been working as an official in various competitions ever since as frequently as possible.

Daily News of Open Water Swimming: Are pool and open water swimming officiating any different?
Dr. Gordon: Staying focused is a part of the challenge and a part of the enjoyment of both open water and pool officiating. The length of the open water races and the amount of time required are certainly different. Fortunately, however, as an official I find that the degree of focus required varies at certain parts of the race. When a pack of swimmers is tightly bunched and contact is inevitable, my focus is at its peak. At other times when the swimmers are spaced neatly and the pace is comfortable, I allow myself to relax somewhat and enjoy the surroundings. As a good official, one never completely loses focus or awareness at any point, whether in the pool or on a lake. But there are times when the intensity does diminish somewhat, both for the athlete and the official.

Daily News of Open Water Swimming: Are you looking for anything in particular in open water races?
Dr. Gordon: During open water competitions I’m not necessarily looking for anything. More so, I’m observing to see what is happening around me. Certainly I’m watching the swimmers for any potential violation, such as interference, illegal contact, missing a turn. But I’m also constantly trying to think ahead, anticipating where I will need to position myself to better be able to see what might happen next. Because we are on boats, maneuvering is not as simple and as quick as being on a pool deck. Safety is paramount, too. One has to be aware of the positions of all swimmers when a boat makes a move. Any injury would likely not be a minor one. And, there are other boats on the water, too, which increases the possibility of an accident.

Being aware of the positions of all of the boats and officials on the water is absolutely necessary. It is choreography on water. There has to be a balance so that the entire field is covered by the officials as much as possible at all times. And eyes must be maintained on all swimmers at all times. The swimmers must be accounted for.

Daily News of Open Water Swimming: Have you had to make difficult decisions or encountered difficult situations?
Dr. Gordon: There are always difficult decisions to be made for any official. Officiating in swimming requires split-second decisions that can result in an athlete being disqualified from that competition. That is a severe penalty, unlike in most other sports. That decision cannot be taken lightly. If there was one decision that perhaps caused me the most consternation, it was canceling the final day of a fairly large meet because the pool water temperature was simply too high. The pool staff was unable to effectively lower the temperature. Swimmers had come from several surrounding states. They wanted to swim and their coaches wanted them to swim. As Meet Referee I felt it was not safe and decided that the only recourse was to cancel the competition. No one was happy, including my own children.

One particular open water event that I’ll never forget was the Manhattan Challenge Swim in 2009 with Petar Stoychev, Mark Warkentin, Rondi Davies and Tobey-Anne Saracino. We started out with four swimmers on a late September afternoon swimming around Manhattan Island. The currents were a challenge, as expected. But I never anticipated the difficulty we would face swimming at night. The lack of visibility, the commuter traffic on the Hudson, the tour vessels…it was unbelievable. The night views of the island were unforgettable for me. But the rest of the experience was very challenging and quite scary.

I cannot leave out my experience at the 2011 USA Swimming Open Water Championships in Fort Lauderdale. On Friday for the 10 km swim, the weather was brutal. There were high winds, tough surf, and a number of swimmers struggling with fatigue and dehydration…it was an official’s nightmare. But on the other hand, it illustrated some of the difficulties we all encounter with the unpredictability of open water conditions. In retrospect, it was an outstanding learning opportunity.


Daily News of Open Water Swimming: During an open water swimming event, where do you position yourself?
Dr. Gordon: There is no one place where I position myself during any race. My position constantly varies, depending on the situation. I try to give myself the best vantage point to be able to see all that is going on around me…the swimmers, the boats, the other officials, the safety personnel, etc. I find myself constantly adjusting. Usually, however, I am stationed somewhere near the front of the boat.

Daily News of Open Water Swimming: What do you try to do while you are officiating?
Dr. Gordon: My goal is always to have a quiet confidence on deck. In addition to being knowledgeable, looking neat and dressing sharply are especially important to me. I also try to maintain a constant calm demeanor throughout the race. Sometimes that can be hard. I would like to believe that other officials and athletes see me as a person who demonstrates a rather calm personality whenever I’m officiating. To me it’s critical to have sound judgment and good common sense when making a tough decision. I feel it is difficult to achieve that goal when one loses control of his emotions. Becoming frustrated and yelling at others have never worked for me, neither on deck nor in real life.

Daily News of Open Water Swimming: Tell us about the 2012 national championships in Fort Myers.
Dr. Gordon: The 2012 USA Open Water Swimming National Championships were extremely gratifying to me. I felt that the event went well and that was what was most important. The swims were great and there were few issues throughout the weekend. Hopefully, everyone enjoyed it as much as I did. My one goal that can never be compromised is that ‘all swimmers must return safely’. Thankfully, once again we were able to accomplish that. Everything else is a bonus to me.