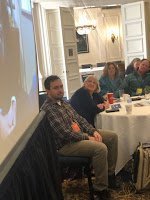 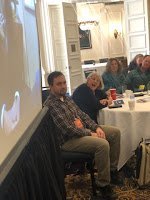 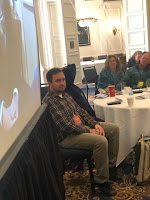 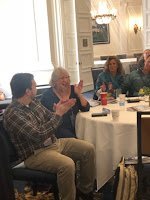 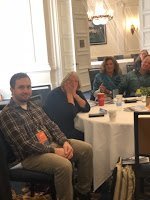 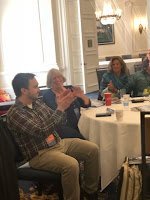 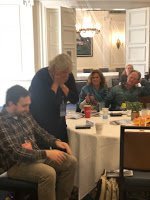 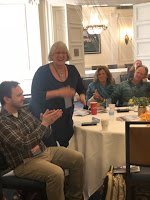 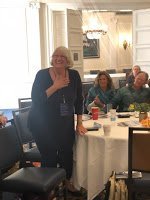 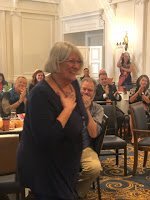 As Denison was explaining the protocols and procedures of the Hall of Fame, he delighted the audience and surprised Gallant-Charette by announcing that she has been inducted as an Honor Swimmer in the International Marathon Swimming Hall of Fame’s Class of 2019.

These photos captured those moments when she first learned of her new Hall of Fame status.

Just prior, Denison said, “Welcome all from Ireland. I am the chairperson of the International Marathon Swimming Hall of Fame where we honor the best in our sport including swimmers, escort pilots, coaches, administrators, writers, inventors and luminaries who make our sport what it is today.

I want to help you understand how International Marathon Swimming Hall of Fame works. We receive nominations which are put to a panel of 40 or so selectors each September. I then get the pleasure of calling the new honorees to left them know as follows:

Denison then proceeded to make another surprise announcement when he similarly informed the audience that Kimberley Chambers of New Zealand was also an Honor Swimmer in the International Marathon Swimming Hall of Fame’s Class of 2019.

With gasps of excitement and ubiquitous smiles and signs of respect being showered upon the 67-year-old retired nurse then proceeded to stand, wipe away her tears of joy, and give an inspirational speech in front of her peers and colleagues.

Her speech, Never Too Old, is appropo.

Pat is an inspiration. There is life – lots of life and success – for the swimmers taking up the sport after the age of 40. Setbacks are part of life and DNF’s are part of marathon swimming.

Pat has experienced six defeats in completing six channels of the Oceans Seven challenge. Her toughest DNF’s included attempting crossings of the North Channel when she pulled after 16+ hours – less than 1 mile from the finish and in the English Channel where she was pulled 1.7 miles from the finish.

She is followed as a role model by many aspiring marathon swimmers – both young and not so young.”

Nine of her swims have set records for the oldest female swimmer:

The retired nurse from Westbrook, Maine explained, “Each swim had a unique set of challenges: speed in Manhattan, high altitude and cold air temperatures in Lake Tahoe, cold water in Loch Ness, and only 3 days rest after Loch Ness in Windermere.”

On November 10th at The Olympic Club, Gallant-Charette will explain her mindset, her preparations, her planning, training and escort teams that she has to continue to raise the bar in the open water at the .

“It is great to see a sport where you can continue to set records in your 60’s and 70’s and are considered to be one of the best in your given athletic discipline. Pat is one such individual – of many,” explains Steven Munatones. “But the road to greatness is never easy and the world’s waterways have always put the hard-working grandmother to the test.

What always impresses me in face of the tremendous physiological stress and marine conditions that she faces and the long hours she endures is that her smile is as brilliant at the finish as her smile is in the beginning. She is always cheerful and deeply appreciative to her crew and family. And she always faces challenges. She has occasionally failed in her crossings – but she always comes back with a success
.”

Footnote 1: True to her profession and helpful nature, Gallant-Charette later quietly and quickly attended and revived a fellow swimmer who had collapsed and fainted during the evening session while another swimmer was giving a speech. Together with fellow nurse Amy Appelhans Gubser, the swimmer was revived without interruption of the speaker and with all due haste and medical care.

Footnote 2: Evan Morrison of the Marathon Swimmers Federation, Joel Wilson of the Monterey Bay Swimming Association, and Forrest Nelson of the Catalina Channel Swimming Federation were at her table.