Pat Gallant-Charette Continues To Rack Up The Honors 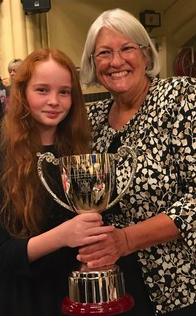 The Channel Swimming Association honored Pat Gallant-Charette with its Mercedes Gleitze Trophy a for a Pioneer swim by a Female.

“On November 4th 2017, I was presented the award by Mercedes’ daughter Doloranda Pember at the annual CSA Awards Banquet. Mercedes’ 12-year-old great-granddaughter Saskia Pember who has a striking resemblance of her great-grandmother, is shown on left.”

Gallant-Charette was also presented with her second career O’Clee Jubilee Trophy for her 17 hour 55 minute crossing (awarded to the Oldest Successful Swimmer across the English Channel).

The 66-year-old retired nurse was also nominated for the 2017 World Open Water Swimming Woman of the Year.

The award is meant to honor the women who:

These nominees for the World Open Water Swimming Woman of the Year include the following inspirational individuals:

Gallant-Charette‘s nomination was as follows: Pat Gallant-Charette continues to amaze year after year. In 2017, the 66-year-old retired nurse become the oldest woman to cross the 42 km Molokai Channel in Hawaii in 23 hours 54 minutes, to complete a 52 km crossing of Lake Ontario in Canada in 24 hours 28 minutes, and to cross the 34 km English Channel in 17 hours 55 minutes. The hard-working, consistently cheerful grandmother has never enjoyed an easy road to her successes as she faces waves, current, marine life and winds, but she always passes Mother Nature’s challenging conditions with an otherworldly determination. For her deeply felt appreciation for all those who support and cheer for her swims, for her visible joy in crossing channels and lakes, for establishing herself as one of the most humble luminaries in the marathon swimming world, Pat Gallant-Charette is a worthy nominee for the 2017 World Open Water Swimming Woman of the Year.

But the honors continue for the Maine resident. Jean Murdoch-Gallant filmed the video below where Gallant-Charette was honored.

On November 12th Solo Swims of Ontario held their unveiling ceremony located at Queen’s Royal Park on the shore of Niagara-on-the-Lake, Canada. Elizabeth Fry was also honored with their names engraved on a plaque. This award recognizes swimmers who successfully swam 32 miles (51 km) from Niagara-on-the-Lake to Toronto’s Marilyn Bell Park. Dr. Marilyn Korzekwa, President of the Solo Swims of Ontario, was the keynote speaker for this event with 80-year-old Marilyn Bell DiLascio assisting.