Pat Gallant-Charette Does Another 24-Hour Crossing

Pat Gallant-Charette Does Another 24-Hour Crossing

Pass 68-year-old Pat Gallant-Charette in the aisle of a supermarket or sit next to her on an airplane and her athletic exploits would not be the first thing that comes to mind.

“You would find yourself talking to a remarkable woman, an individual with equal parts warmth and friendship and marathoning tenacity.  She would ask all about you and what you do instead of touting her own very long record of accomplishments,” observed Steven Munatones. 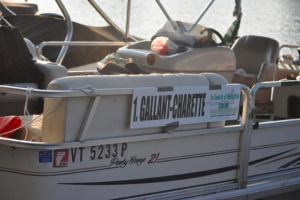 “But she continues to add to her prolific record of success in lakes, channels, seas and rivers.  She set a record swimming across Lake Memphremagog on July 31st.  Not only did she do another 24-hour swim – after her 24 hour 28 minute 51 km crossing of Lake Ontario in 2017 – but she also became the fourth person in history to accomplish the Triple Crown of Lake Monster Swims after Sarah Thomas and Craig Lenning did it in 2015, and Elaine Howley did it in 2016.”

A mother of two children and the grandmother of 3 in Westbrook, Maine completed a south-to-north 40.2 km crossing of Lake Memphremagog on August 1st between Newport in the American state of Vermont and Magog in the Canadian province of Quebec in 24 hours 8 minutes (a 24-Hour Club achievement).  Phil White, her escort kayaker and founder of the Kingdom Games, described the day, “She left from the EastSide Restaurant in Newport at 10:11 pm on July 31st and cleared the water in Magog at 10:19 pm on August, 1st.  She did so in full compliance with the general standards for channel crossing and open water marathon swimming, and fully consistent with the rules established by Marathon Swimmers Federation: a bathing suit, cap, and goggles. Feeds in a bottle on a rope and a stick with a cup.

An “adult onset” open water swimmer, she has an extraordinary record of accomplishment, including the English Channel (twice), 20 Bridges Swim Around Manhattan, Catalina Channel, as well as Tsugaru Channel, North Channel, Kaiwi Channel, all completed after she turned 60 years old, and earning her induction into the International Marathon Swimming Hall of Fame as an Honor Swimmer earlier.”

The swim is part of a series of expeditions and solo swims across the length of Lake Memphremagog known as In Search of Memphre that are organized and hosted by White and the Kingdom Games.  “Our mission to support a more open border with our Canadian friends and to seek out our swimmer friendly lake creature, Memphre,” explained White.

Water temperatures were 74°F (23°C) the length of the lake.  Winds were 2 to 5 mph from the south during the first few hours of the swim. As the sun rose, the winds shifted to the west and then to the north west and varied from light to up to about 10 mph.

White continued, “At about the 2/3rds point of the swim, she experienced an injury to her lat which prevented her from lifting her right arm out of the water. She tried backstroke and breaststroke to loosen herself up, but she could not resume a full crawl and she had slowed down considerably. With about 5 miles to go, she began a dead arm crawl, using her left arm fully and extending her right arm below the water for some pull. It was a bit like watching Charles Laughton stagger-walk in the Hunchback of Notre Dame. She did this for the remainder of the swim, actually increasing her speed during the last two miles as the sun set and nighttime arrived.

From the start, we were using sea anchors to help slow us down to her pace (and avoid shifting in and out of neutral).  But with her slower pace during the last third of the swim, we were forced to slip in and out of neutral.  Every time we did, the cross wind pushed us away from of the center of lake toward the eastern shore.  This brought us into some subtle, but tricky, eddies and rips, making the swim that much more challenging.  She also encountered the pull of the River Magog at the northeast end of the lake during the last mile.”

As she approached the Canadian shoreline, Peter and Geneve Channell set up flashing lights on the beach as a finish target.

White was visibly impressed, “It was pure joy and an honor to escort this tough-as-nails, determined grandmother, stroke-by-stroke down the lake, staggering but undaunted during the last five miles to the finish. One of the most remarkable pieces of epic, we have ever witnessed on Memphremagog.”