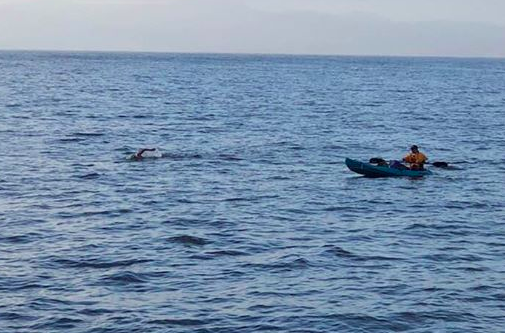 He discusses his record-setting swim:

Daily News of Open Water Swimming: What prompted you at the age of 69 to attempt to swim across the 32.3 km Catalina Channel?

Pat Marzulli: I have multiple friends in my Tampa Bay open water swimming community: Mark Smitherman, Maureen Montgomery, Chris Burke, Serbo Simeoni, Ron Collins, etc., who had mad successful crossings and convinced me I could do it. And I knew my age window was closing.

Daily News of Open Water Swimming: Why did you pick the Catalina Channel?

Pat Marzulli: See answer above. Also, it is one of the major iconic swims. I had already done Tampa Bay Marathon Swim, Manhattan Island Marathon Swim, and other slightly shorter swims, so I felt I could do the distance.

Daily News of Open Water Swimming: What is your training like on a daily basis? Do you do any dryland training?

Pat Marzulli: When in training for a long swim, I will do between 4,000-5,000 yards daily on 4 weekdays. On weekends, the distances will go up as high as 10,000 yards, sometime more. At the peak, I will shoot for mid 40’s + K weeks. I do incorporate a dryland routine with emphasis on core and shoulder rotator cuff exercises. I have in the past worked out with a local sports trainer, Larry Mayol, who was the former head manager for the New York Mets. He keeps my shoulders in shape.

Daily News of Open Water Swimming: Did you encounter any issues – physiological, psychological, logistical, emotional – during your training in the lead-up to your success?

Pat Marzulli: During and following this year’s SCAR Swim Challenge, I experienced some respiratory issues which I had to recover from. Then as summer dragged on, I was tired of the training, but I set both aside and kept working. About a month out, I had to deal with some rotator cuff issues, but Larry helped get that issue resolved as I tapered. And there is also the inevitable self-doubt about being prepared and whether you can make it.

Daily News of Open Water Swimming: Did you encounter any issues – physiological, psychological, logistical, emotional – during the Catalina Channel swim itself?

Pat Marzulli: Physiologically and psychologically, there were no issues that we hadn’t prepared for. The planned hot fluid tea mix was scrapped at the beginning due to minor indigestion, but the backup water, Carbo Pro, and amino vital feeds warmed up substituted just fine.

The planned tea mix with apple juice turned out too upsetting to the stomach. I also, alternated between vanilla bean Gu and a caffeine Gu blueberry pomegranate. About two-thirds through the course, I had prepared a rice mush concoction with honey which really went down well.

I did experience navigation issues in the night portion of the swim as the lights on my kayak escort blended with the background lights of the boat. I kept veering to the right and then back to the left to find the kayak. This zigzag issue resolved itself once daylight came. However, later in the last 5 miles, as we encountered a northern current, I kept veering off course to the right. While I knew I needed to adjust, I had difficulties staying on the line to finish.

Daily News of Open Water Swimming: How did you overcome these issues?

Pat Marzulli: My companion swimmer, Lisa Hertz Malick and her husband JC Malick in the kayak were persistent in getting me back on line. The observers were concerned I was losing mental capacity, but that was not the issue. Once we had a boat-to-swimmer intervention, they let me keep going.

In general, my Tampa Bay open water swimming companions had repeated to me, ‘Swim from feed to feed’ and ‘Don’t think beyond the next feed’. It was good advice which I followed with a single-minded determination and focus.


Daily News of Open Water Swimming: Who was on your escort boat across the Catalina Channel? Did you have any particular reasons why these individuals were chosen?

Pat Marzulli: The boat was The Magician with head captain Carl Mayhugh – working captain for my swim Derek.

My wife, Martine was my main Crew Chief. She was assisted by Lisa when Lisa was not my companion swimmer. JC was my main kayaker. He had escorted me in my Manhattan Island Marathon Swim in 2015 and other shorter swims. I had the utmost faith in him.

The second kayaker was John Steed who brought a friend of his Jimena Santibanez, who was very valuable help to my wife. I had decided to bring John on about two weeks earlier when I was persuaded by my observer that two kayakers was safer. It turned out to be a good thing, since the conditions were far more challenging than JC thought they would be. The head observer was, Don Van Cleve. The backup observer was Gary King, both of whom were invaluable and supportive, while staying neutral.

The support of my wife leading up to and during the swim cannot be overstated. She was an enthusiastic Crew Chief and extraordinary cheerleader and advocate throughout the swim. As Martine’s favorite mermaid, Lisa played a crucial role in the “ behind the scenes” aspects of the swim; managing the feed prep, timing, and delivery of feeds, coordinating the kayak exchanges, training Jimena to take over for her when she was pace swimming, and was critical as the pace swimmer particularly at the end when it was needed most.

Daily News of Open Water Swimming: Can you describe your feeling when your hand touched the ocean floor and you started to walk up on shore?

Pat Marzulli: Happiness, relief, and joy that the grind was over. I was really moving slow at the last half mile and the walk up the beach you mention was a virtual crawl over the rocks and seemed to take forever. But I was done and just sat on the dry rocks for several minutes, catching my breath. Finally after a moment, we got back into the water and I let the kayaker tow me back to the boat.

Pat Marzulli: Initial muscle soreness was gone in 24 hours. Overall, my recovery is still in progress. The mental and physical fatigue are subsiding.

Daily News of Open Water Swimming: What is next on your open water swimming bucket list?

Pat Marzulli: My application is in for the Strait of Gibraltar. Beyond that, shorter tropical, warm water swims where I can see fish and don’t have to travel so far.