Now on to Cape Horn. 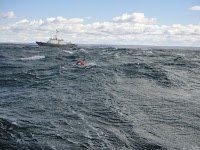 The men successfully crossed the icy and remote Beagle Channel from Chile to Argentina at the southernmost towns in the world.

Then, after walking onshore in Argentina, the five friends from Cape Town, South Africa turned around and swam back to Chile to complete their 3.2K double-crossing of the Beagle Channel.

Confidence in their training and preparation, combined with a sense of awe and a healthy dose of safety precautions, has helped them so far – and will be necessary on their final challenge as they attempt an unprecedented mile swim around the Cape Horn lighthouse, the southernmost tip of the South American continent.

The last outpost before Antarctica is a formidable challenge. “A Dutch couple who just sailed back from Cape Horn gave us tips on where we can swim. We will have our escort boat, a Navy boat and two zodiacs [following us along with] a diver and doctor on the Navy boat. On Monday we head off to Cabo de Hornos on our mission impossible,” reported the team.

On February 15th, the five swimmers completed their first swim of 4K across the Strait of Magellan in Chile despite strong wind gusts that caused rough seas. Four days later, they completed a double crossing of the Beagle Channel. Surrounded by snow-capped mountains, the men started at Punta Pene near Puerto Williams on the Chilean side of the channel, swam across to Punta McKinley on the Argentinean coast and then returned to Chile finishing between 48-57 minutes. To add to their logistical requirements, Andrew, Toks, Kieron, Ryan and Ram had to undergo passport control procedures on Chilean and Argentinean boats in the channel.

“This [Beagle] swim of felt colder than our earlier Strait Magellan crossing. The Chilean and Argentinean navy measured the water temperature at 4-5°C (39-41°F), while we measured it at 8°C (46°F). The big unexpected factor thrown at us during the swim was the current which pushed us sideways. We had to correct our course against the current constantly,” said Kieron.

Ram mentioned that they are all suffering from various degrees of flu and that the double channel swim had humbled them. “Mentally, after completing Magellan, we were elated and ready to take on any challenge. But the cold water and strong current was a harsh reminder of the extreme nature of our endeavours. Reaching dry land on the Argentinean side and then having to dive in to swim back was also daunting.”

“We encountered whirlpools on the way back. Then, the current pushed us half a kilometer from our planned landing point in a relatively inaccessible area. Our support teams was only able to reach us with dry towels some time after we landed. We pay tribute to those who’ve completed this tough swim before us and we’re proud to be the first South Africans to have done it.”

“We are now preparing ourselves for Cape Horn which is set to be one of the toughest swim challenges we’ve ever taken on,” understated Ryan.

The team can be followed on their Facebook page.