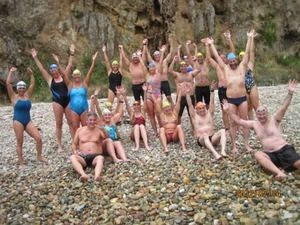 One of the event sponsors is a local ocean swimmer who knows the coastline and race course extraordinarily well. Through her Ober Reef Photography, Patsee Ober has been capturing beautiful images of the coastal tide pools and underwater environment in the area for years.

A long-time member of the Oak Streeters open water swimming pod, the Laguna Beach resident also coined the term Masterfeedermixer while serving as a crew member in a Catalina Channel crossing.

Her stunningly beautiful artwork of the coastal environment can be seen here. Her images vary from sea urchins with microscopic tendrils to the panorama of colors lit up in a sea anemone.