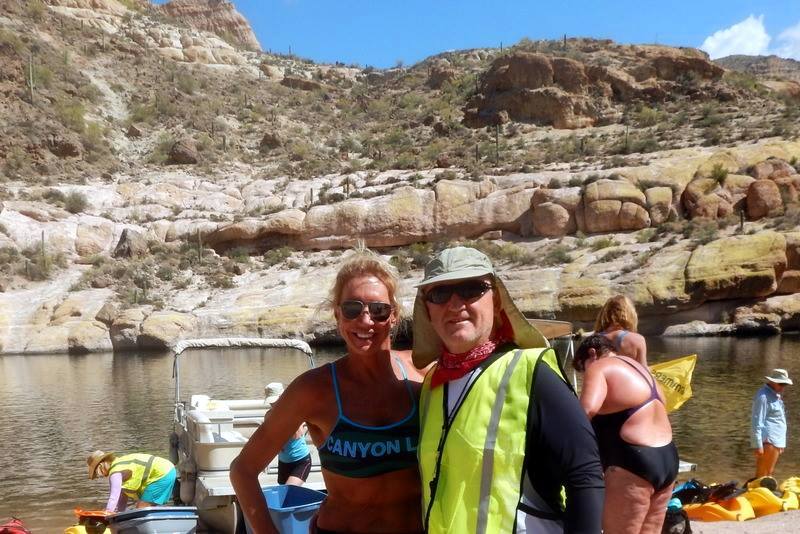 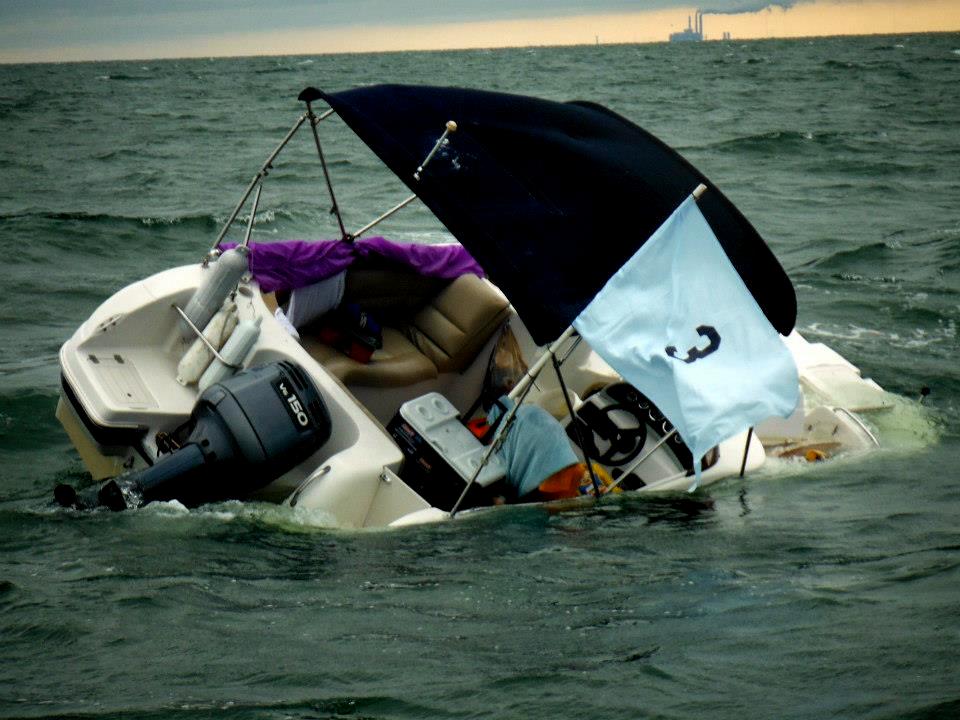 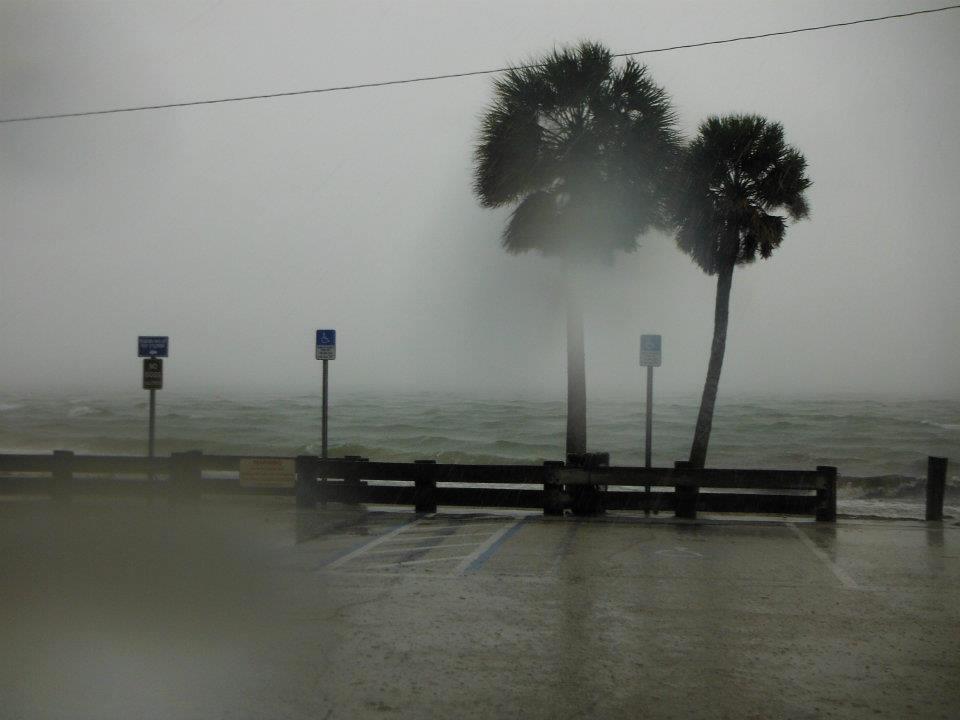 Patty Hermann, a 57-year-old from Houston, Texas, is entered into this year’s Tampa Bay Marathon Swim in Florida.

This will be her fourth visit to the 24-mile race. “I did it twice on relays and last year as a pace swimmer for Ranie Pearce. I’m tackling this with Martin Strel paddling for me.

We’ve done so many swims as a team. He’s motivating and relentless. I have a lot of respect for this event as I know there’s an intimidating DNF list that can be chalked up to some pretty rough water and unpredictable weather
.”

She talked about the event:

Daily News of Open Water Swimming: Why do you wish to enter an event in which you have experienced such tough conditions?

Patty Hermann: Well, to a certain extent, tough conditions are fun for the pure challenge of it, but I don’t necessarily need 24 miles of it to get my money’s worth. I’m hoping that the Bay will be favorable this year, but with open water, it’s always a crap shot. I was on a relay in 2012 when the event got called because a mini-hurricane came through and threatened the safety of everyone on or in the water. Thinking it wouldn’t happen twice in a row, our relay went back in 2013. That year, course conditions quite literally took out a couple escort boats and only 6 out of 18 solos made it to the finish. Last year, I went with Ranie Pearce as support and a pace swimmer. We were in the water the weekend before the actual event and the conditions were great. A weekend later, on race day, swimmers were fighting high winds and [race director] Ron Collins had to alter the course to circular laps in a protected part of the Bay. It was called after three and a half hours. With no particular logic, I’m figuring the race is due for some nice weather on April 22nd.

Daily News of Open Water Swimming: How much do you train for a 24-mile swim?

Patty Hermann: I swim five days a week pretty much year-round so I maintain a decent distance base. The only breaks in that regime are for races. My yardage goes up and down depending what’s on the race schedule. Right now, five weeks before Tampa, I am getting in about 30,000 meters a week and will take that up another 5,000 meters over the next couple weeks, then back down in the last 10 days. I’m trying to follow the good advice of some of my more experienced marathon swimming friends and focus on intensity and not so much of what I call garbage yardage. I always try to get at least one 3-hour swim a week; and once before Tampa, I’ll head into my own Gulf of Mexico water for a 6-hour swim. I also work with a strength trainer 3 days a week in the gym and unfortunately have physical therapy on my left shoulder twice a week for a small rotator tear.

Daily News of Open Water Swimming: What are your three toughest workouts in preparation for the Tampa Bay Marathon Swim?

Patty Hermann: As a distance swimmer with very slow twitch muscles, my toughest workouts are when my coach has a lot of sprint work on the schedule. But I know this is good for me because that is the increased intensity work successful marathon swimmers keeps telling me I need to do. Another workout session that is an integral part of my preparation, but still tough, is my weekend trek to a nearby training lake. With this workout, it’s not so much that it is difficult as it is lonely and tedious. At masters swimming practices, even the hard days are enjoyable in the company of friends. At the training lake, it’s just me and endless laps around a 1 km course to maintain my yardage. My toughest workout will be a couple weeks before Tampa when I head to the Galveston Beach for my 6-hour swim and get a final evaluation of where my fitness level is. I’ll come away either confident of the upcoming race, or bargaining with the swimming Gods just to let me get through it.

Daily News of Open Water Swimming: How does Martin Strel motivate you during a swim? What does he say or do?

Patty Hermann: It’s not so much what he says or does; it’s just his presence. Martin has thousands and thousands of open water miles experience. He radiates confidence and calm strength; he doesn’t fail so you don’t want to fail on him. His swimming karma is contagious. If I start to get tired and whiney, he will answer my frustration in his thick Slovenian accent with a matter-of-fact acknowledgement of, “Yes, yes … tired. It is long course, but we keep going.” From the very beginning, it is always “we” this or “we” that, reminding me of his support. Martin’s also taught me a lot about feeding. In the past, my weak nutrition plans have sabotaged swims I’ve otherwise been prepared for. And as a side note, Martin knows water; he could find current in a bath tub.

Daily News of Open Water Swimming: How many swims have you done with Martin?

Patty Hermann: Martin has supported me two years at S.C.A.R.’s 4-day stage race and 2 years at END WET in North Dakota. The Tampa Bay Marathon Swim will be our fifth distance race together. He still maintains his own strict training schedule, but like so many of us, has found a lot of enjoyment on top of the water where you can actually see the beauty of the swim venue. His son, Borut, is a good friend and has paddled for me a couple times at Swim The Suck. 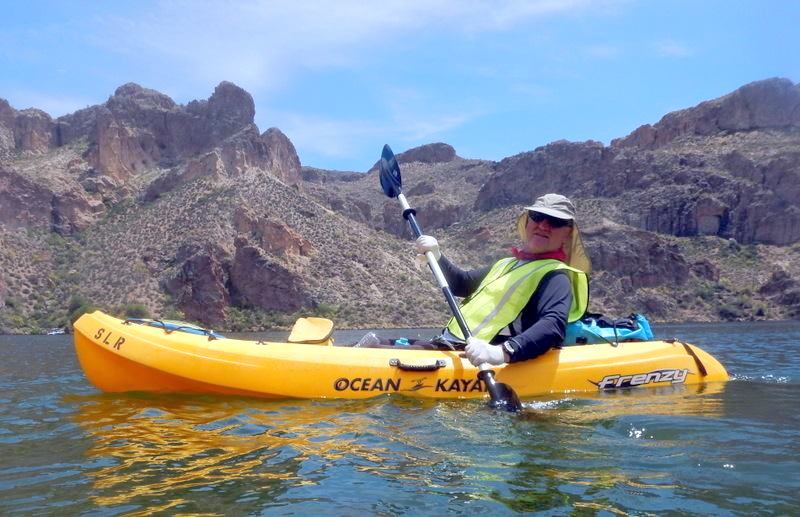 Daily News of Open Water Swimming: What is your overall strategy for this event? Do you plan to negative-split the swim or swim at a certain pace?

Patty Hermann: Knowing what I do about Tampa Bay and the unpredictability of the conditions, I will try to cover as much distance as I can before the wind picks up at mid-morning. From that point, I just want to set into a pace that I can sustain through the highs and lows of the day. If I hit a patch of current, I’ll take advantage of it and try to match the push with some extra effort of my own. From what I’ve seen in the past, I know swimmers can spend some extra time and effort between the Gandy and the Franklin Bridges at the end; I’ll need to save up for that. It’s hard to say exactly what I expect my pace to be, but overall it will be pretty steady in keeping with the conditions. The idea of negative-splitting the race is almost funny. I haven’t negative-split anything in 20 years; but I can be like a “horse-to-the-barn” for that last half mile when I can actually see people at the finish line.

Upper photo shows Hermann with Strel at Canyon Lake at S.C.A.R. Second photo shows the stormy scene from the parking lot at the Ben T. Davis Beach at the 2012 event, the year of the mini-hurricane. The picture of the sinking boat of Carl Selles is from the 2013 event.