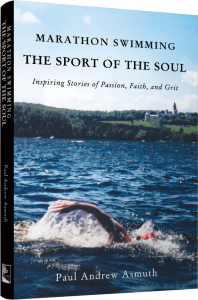 Courtesy of WOWSA, Huntington Beach, California. One dominant figure on the marathon swimming scene in the 20th century was American Paul Asmuth. Asmuth won 7 World Professional Marathon Swimming Federation titles in the 1980’s and is an inductee in both the International Swimming Hall of Fame (Class of 2010) and the International Marathon Swimming Hall of Fame (Class of 1982) for winning several dozens of long and difficult marathon races from Canada to Italy. When asked to describe his toughest workout over the course of his career, Asmuth recalled a long day in the office at the Mission Viejo Nadadores pool under the helm of USA Swimming Olympic and National Team Head Coach Mark Schubert.

Asmuth describes the doubts, uncertainties and struggles with the cold, currents and conditions that he had to overcome in his races to succeed. The three-time NCAA All-American swimmer and team co-captain at Arizona State University had his dreams of competing in the Olympics dashed by the 1980 boycott. But that disappointment ultimately led him to showcase his swimming prowess on the World Professional Marathon Swimming Federation where he was the dominant swimmer throughout the 1980’s while working as a California Certified Public Accountant. Asmuth has long retired from accounting, but shared his knowledge of the sport while coaching the USA Swimming national team between 2007 and 2016. He currently serves as the general manager of The Napa Valley Reserve, a private winery and club in St. Helena, California. Elm Hill describes Marathon Swimming: The Sport of the Soul as a chronicle of Asmuth’s rich experience in his swimming career and spiritual journey. The Sport of the Soul refers to how marathon swimming diminishes all five senses — hear, feel, touch, smell, and sight — where he is moved deeper into his soul to the very essence of who he is and who God has made him to be. The 244-page Marathon Swimming: The Sport of the Soul is available in eBook, paperback and hardbound formats. The book has already been translated into French. The French-language edition will be released later this year. To hear and meet Asmuth, register for the 2019 Open Water Summit and the Redondo Beach Coastal Challenge in Redondo Beach, California on October 4th – 6th at www.openwatersummit.com. Copyright © 2008-2019 by World Open Water Swimming Association