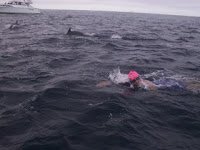 Last year, Petar Stoychev pulled off an incredible double victory while traveling around the world.

The world champion and English Channel record holder from Bulgaria not only won the 9.3 km Cadiz Freedom Swim in 12°C (53.6°F) water in South Africa over tough competition, but he also won the 2011 World Swimming Championships 25 km race over the world’s elite in the 32°C (89.6°F) water in Shanghai, China.

This year, Penny Palfrey is taking that cold water – warm water differential to another level as a solo swimmer.

According to her newsletter reports from the cool waters of South Australia, she is currently preparing for her 21-mile North Channel swim between Scotland and Ireland in water potentially as cold as 10°C (50°F) with similarly low air temperatures. This swim, considered by some as the toughest swim in the world, will come after her June attempt at swimming 103 miles in 26°C (80°F) water under the tropical heat in the Straits of Florida between Cuba and the United States.

How these chameleon-like swimmers manage such wide variances in water and air temperatures is a credit to their approaches to the sport and their arduous physical training and mental preparation. They effectively balance the opposite ends of the marathon swimming spectrum at the highest echelons of the sport within relatively short time periods is remarkably unique.