Paula Yankauskas Feeling Comfortable In Her Own Skin 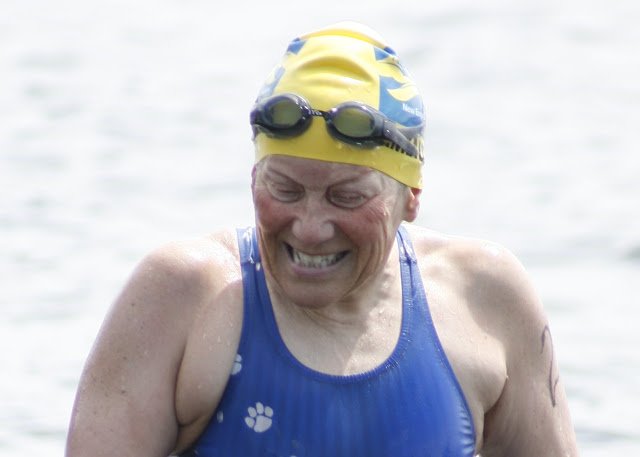 Paula Yankauskas competed in the WOWSA World 10-mile Swimming Championships. The 58-year-old dynamo tells her impressions of the race.

Daily News of Open Water Swimming: How did you feel before the 10-mile swim?
Paula Yankauskas: I was ready to swim, relaxed and happy. I warmed up with a brief jog to a faraway parked car to retrieve needed items for my kayaker, Deborah Beier, just prior to the start. And when I said “ready” to swim, I meant well-prepared mentally and physically, despite a tentative shoulder.

Daily News of Open Water Swimming: How did you feel in the first half of the race?
Paula Yankauskas: I felt strong, confident and proceeding to plan, albeit with the awareness of the way this course could be different as one progressed through the miles. The water felt smooth; the signal patterns were right on from Deborah; the feeds were delicious and quick. I was way ahead of my Son of a Swim pace when I passed the lighthouse at just under the first hour. In the Son of a Swim, I passed that point at about 1 hour 25 minutes. I figured the warmer water was the difference, as well as my shoulder holding up well. My approximate split at 10K was 3 hours 35 minutes. It is not real fast, but close to my only previous 10K of 3 hours 17 minutes in a wetsuit. Although the water conditions were getting rougher then, and that after the sway across the top of the course approaching and going by the islands.

Daily News of Open Water Swimming: How did you feel in the second half of the race?
Paula Yankauskas: I was challenged by the rough water not so much in swimming in it, but more in coordinating with Deborah and the kayak. Rough water is okay as I have learned how to relax maybe even enjoy it. My shoulder injury was aggravated by how I handled one particular wave. After that, I was being a bit more careful with technique and I was able to manage pretty well. I finally moved to the right of the kayak where my work on bilateral breathing was quite helpful. Deborah later told me that the distance between the buoys on that stretch – from #5 to #6 and #6 to #7 – is a little difficult and maybe a bit discouraging. I did think they were far, but I didn’t feel any frustration. I just kept my head down and trusted her and counted long cycles or had long thoughts before taking any looks. I could tell that we were making progress.

Deborah did ask me once if I wanted out, to which I replied emphatically in the negative. I wondered why it was asked just before buoy #7. I had just told her that I was cold in that section, but what I didn’t know was that my stroke rate was 53; it is normally 64 to 68, and my pickups were not being sustained for the full 3 minutes. I did feel fine, maybe a bit tired but I had plenty left in the tank. I have experience of how it feels to be really drained or really cold. Anyway, we kept on.

Daily News of Open Water Swimming: How did you get over the fatigue during the race?
Paula Yankauskas: Here is where I felt my training for this event paid off. I had gotten much farther feeling strong than previously so I was feeling happy about that; happy feelings to me add confidence so although I did feel sore and banged up, my body kept doing what I asked which was swim and no negative thoughts got in the way.

Daily News of Open Water Swimming: What did you eat or drink? How often?
Paula Yankauskas: My feeds were all the same. I had packed twelve, hoping to only need ten. I used eleven, plus I did have a thermos with hot chocolate in it but I didn’t drink that until later at home. The feed for each hour, divided into 2, was blended sliced peaches, applesauce, pineapple juice for the liquid into which was blended one scoop of Endurolytes and one scoop of Perpeteum both Hammer Nutrition products. Feeds started at one hour, and then were reduced to every half hour. We did have one delayed 15 minutes in the rough water section when we were sorting out positioning relative to each other. I did learn that I would benefit from having some variety to my feeds in the future. Previously, I have used different fresh fruits in the base and I think that will be sufficient, like pears as well as fresh peaches, nectarines, etc. I will try other things as well in training with this aim for variety in mind. I learn something new each swim.

Daily News of Open Water Swimming: Did you and your kayaker talk during the race?
Paula Yankauskas: Yes, we had brief information exchanges on each feeding. And encouragement was also shared. Daily News of Open Water Swimming: What was your strategy versus your competition?
Paula Yankauskas: This time around, I was not focused on competition outside myself. This was my first attempt at this distance in skin. However, my strategy was to follow a pattern: 10 minutes strong smooth swimming with a two beat kick. I would adopt a sequence pattern with breathing and stick to it until Deborah signaled a pickup for 3 minutes, then an active recovery for 2 minutes. She’d signal the end of that so I’d know when the ten-minute segment started. The feedings were at the end of every other 15-minute cycle.

Daily News of Open Water Swimming: How did you feel after the race?
Paula Yankauskas: Immediately after, I was a bit unfocused and pleasantly tired. I was a bit sore in body, but quite buoyed in spirit. At home, I took a short nap and then woke up super charged up. I am not sure how to describe it: comfortable, euphoric, motivated, intense. I surmised that maybe endogenous endorphins were playing a part in that feeling.

It was easier than the Son of a Swim event a few weeks ago. I have a friend, Charlotte Brynn who has written that mental toughness can be learned and even coached. I am starting to believe that there is truth in that, if one is properly motivated and encouraged. One of my goals for this summer was to start swimming without a wetsuit in some of these Vermont swims. The Son of a Swim was the first of the Kingdom Series to test myself on. I think it was 61 or 62ºF with some places were colder. It was uncomfortable. When swimmers passed me headed back as I approached the Lighthouse buoy, I was tempted to join them. There were still 4+ miles to follow, but I had been colder when I attempted an Ice Swim in April in Lake Champlain with Charlotte where she was successful in completing a mile, but I pulled out at my request at about 3/4 of a mile. I didn’t know what the visual and auditory changes in my perception portended. The water temp that day was just under 41ºC (5ºF). After I stopped fighting mentally with myself, this stopped a floundering style of swimming. I started to learn that I did warm up if I picked up my stroke rate. Shivering started at 3.5 miles, but I could make it stop by adding effort, and this was interesting enough to occupy my mind for quite a ways. That was a good hump to get over in terms of mental training. I almost didn’t manage it. Definitely a harder experience than Kingdom Swim, but surviving Son of a Swim likely is what made Kingdom Swim more bearable.

Daily News of Open Water Swimming: What are your next open water swimming goals?
Paula Yankauskas: Well, for this year I want to make a good showing in the Swim the Kingdom series, and will be working particularly on getting ready for the Willoughby Lake swim. I’m also entered in an event called Swim the Suck in Tennessee later this year (October, 10 miles with the river current with or without enhancement from an upstream dam that may affect the strength of said current. So part of it has to be engaging help for the health of my shoulders. I need to see my talented Physical Therapist, Keith Geissler; get worked on by Bill Kules, a massage therapist; modify land training with core and shoulder stabilization in mind; and work on improving swimming technique. That in addition to working on speed and endurance. The goals are motivating, as are the swims gone by, but my mainstays are my kayaker Deborah, swimmer friend Charlotte, and the swimming community, especially the pod with which I currently swim. They are based in the Masters Group at the Swimming Hole in Stowe, Vermont, and for open water, the subset of us that regularly venture out to the Green River Reservoir conveniently located in my home town.

As for beyond this year? Well, you could follow me on twitter (@YankauskasVMD). I have ideas (Alcatraz, Ice Swim, English Channel), and might just astonish myself! (Due to my age, ahem, maturity, my own husband fears I might have missed my window for swimming challenging waters. I can see his point, but plan on proving the window to still be open).

The Kingdom Swim is amazing! It is a jewel of a swim, well-organized, well-run, tremendously enjoyable, and in Vermont! Kudos to the hard-working attentive people responsible for pulling it off, especially Phil White. And, from the swimmer’s viewpoint, thank you!