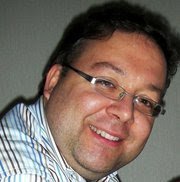 Pedro Adrega, Head of the FINA Communications Department and Editor In Chief of the FINA Aquatics World Magazine, received the 2011 Al Schoenfield Media Award at the International Swimming Hall of Fame induction ceremonies this past weekend.

A humble person fluent in five languages, he is a serious journalist with experience in all five aquatic disciplines, cycling, basketball, volleyball, motor sports, judo, tennis and golf.

He gave a short and characteristically modest acceptance speech in front of His Serene Highness, Prince Albert of Monaco and the distinguished crowd of over 300aquatic luminaries in Fort Lauderdale, Florida:

“It is an honor and privilege to [receive] the prestigious Al Schoenfield Media Award from the International Swimming Hall of Fame. If receiving a prize is always an exercise in humility, I feel specially touched to be accompanied on this special occasion by such a distinguished company.

Stars in the five aquatic sports are recognized tonight for their performances and for being leading role models for the youth of the world. Their example certainly inspires all of us.

The speed of swimming, the grace of synchronized swimming, the team spirit in water polo, the aesthetics of diving and the endurance in open water swimming are characteristics shared by FINA’s athletes.

And in performing them so well, and combining them with the values of fair play and friendship, they make our sport an intense and exciting experience of life.

That is also why they make media’s work become easy. It is a pleasure reporting on your feats, as they represent an immense work, an unbreakable will, an unstoppable devotion, and a great deal of sacrifice.

You must be proud of sharing those feelings with your fans in the five continents. As media, we are immensely happy to transmit them to our readers, radio listeners, TV viewers or social network followers.

You produce good stories because besides your performances, you are also exemplary athletes and citizens.

And this is the essence of sport – what I and all my colleagues try to modestly share with our audiences. Thank you.“