Penny Palfrey Keeps The Molokai Channel In The Family

Penny Palfrey spent the night before her Molokai Channel swim in an evacuation center on Molokai due to the tsunami warnings that were into effect throughout the state of Hawaii due to the devastating earthquakes in Japan.  At 10:30 pm the night before her planned swim, Penny and her husband were awaken by the hotel staff and told them had ten minutes to evacuate the hotel due to impeding tsunamis that would hit Hawaii. 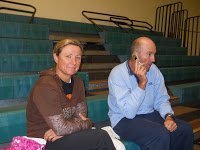 Quickly gathering all their belongings and rushing out their rooms into their rental car, they took off quickly to higher ground.  Unfamiliar with the island of Molokai, they followed a line of cars and eventually found themselves at Molokai High School gymnasium, one of the designated evacuation centers on the island. Unable to sleep on the bleachers, Penny was not happy with worry etched on her face.

Yet she remained focused on her goal of completing the Molokai Channel, a swim that her husband Chris Palrey held; the record of 12 hours 53 minutes. 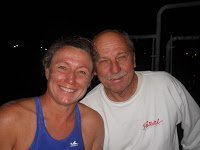 Meanwhile, her pilot Jim Dickson (shown on right) was instructed to leave the wharf where he had been waiting for Penny’s arrival the following morning. Jim and his son Codie left for deep water out of the impact of the surge that was expected.

The unknown and uncertainty reigned. Neither Penny nor Jim could predict what would happen over the next 24 hours – they stayed glued to the TV and radio news.

But they both kept faith that the swim would eventually come off and stood alert for any breaks or opportunities.

But dawn came and the tsunami warnings were still in effect. Penny had moved from trying to sleep on uncomfortable bleachers to resting in the back of her rental car.  At 8 am, Penny and Chris tried to get to the wharf, but the police had blocked all roads and there was no possibility of getting down to the water’s edge. Reluctantly, the team moved back to the evacuation center.

Penny, Chris and Dickson talked and they decided to see if the restrictions would be lifted later in the day. But every minute they delayed the start, the weather continued to deteriorate. All the months of planning that had gone into picking the right time and place to start the swim had gone out the window. With no sleep and plans gone awry, it was remarkable how confident Penny still remained in her training and her team.

By 9 am, the authorities had lifted vehicular travel restrictions and granted access to the wharf. Penny and her crew raced down to the shoreline to witness the continued surge from the tsunamis that had broadsided all the islands of Japan. The energy stored up between the islands was evident wherever one looked upon the shoreline. Yet, despite these ominous signs, Penny and crew boarded Dickson’s Kihei Boy escort boat and drove full throttle to the start as Penny prepared on the rocking boat.

As they reached Laau Point on the westernmost point of Molokai Island with Oahu a full 26 miles away, the winds slapped them in the face and threw a relentless stream of whitecaps at them.  For once, worry was finally etched on the veneer of Penny’s face. But she applied layers and layers of sunscreen and lanolin to protect her face and went through her normal stretching regimen and preparations.

She was ready to take on Mother Nature come literally hell or high water.

At 10:54 am, Penny jumped in the water and took off at her controlled but furious 76 stroke per minute pace.  Hour after hour, she maintained the quick pace and only occasionally commented that the conditions were less than ideal. “The water is kind of bumpy,” she smiled with a twinkle in her eye during her feeding stops every thirty minutes.

By the fifth hour, it was apparent that Penny was on record pace despite the less-than-ideal circumstances. “It was tough.  I wanted to put in a big effort in the beginning so I could get away from [the Molokai] shore due to our late start. I guess I used up a fair bit of energy and I thought I would pay for it later, but I have done a lot of training. That last bit [of the swim] was hard getting into shore [on Oahu] with the full flood of the ebb tide.”

Penny acknowledged the tough stretch of water was also incredibly gorgeous. “It was great out there. It was beautiful. I swam over a whale before my first feed. I first thought it was a whale shark, but I also saw the bottom so I figured that it could not possibly be [a whale shark]. That was pretty amazing. I saw dolphins. I actually saw the fins.”

Every 30 minutes she stopped, but every so briefly. First a banana-flavored drink on the first feeding stop, then a chocolate-flavored drink on the second, then coffee-flavored on the third. Over and over again, but the stops were nearly always under 10 seconds. Reach, drink, listen and go. Reach, drink, listen and go. She was making an incredibly difficult channel on a particularly tough day look easy.

“It was rough. The beginning was particularly tough. It never really settled down. It was hard work. I am satisfied. My crew was amazing; they worked hard. I knew everyone was tired after getting no sleep with the tsunami warning and asked to leave the hotel. It was a big effort from everybody.”

Penny’s big effort resulted in a record-setting swim of 11 hours 40 minutes and 33 seconds, more than an hour faster than her husband’s previous record.

“Since first watching marathon swimmers from 1979, Penny Palfrey’s swim was one of the gutiest swims I have ever had the privilege to witness,” said observer Steven Munatones. “She made one of the toughest channels in the world – on a particularly rough day under extraordinarily unusual conditions after a sleepless night – look simple.  Few others could have done that. She was amazing.”