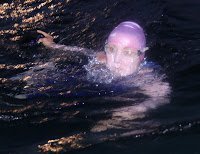 Chris Palfrey hosted Penny Palfrey‘s press conference in Key West while his wife remained in a local hospital under observation.

Chris explained the drama that unfolded the past two days under beautiful conditions about his wife’s attempt to cross the 103-mile Straits of Florida to the international media.

“Penny started in Havana, Cuba at 7:03 am on Friday morning.

She continued to swim continuously for 41 hours 3 minutes until she was given the news that she was facing insurmountable currents of the Gulf Stream
.”

Penny‘s team had planned for 5 different possible finish locations. The locations ranged from Key West to Marathon along the southern coast of Florida. Each location has their advantages, but it did require Penny to navigate diagonally across the Gulf Stream.

When she was informed that she was losing ground on every stroke, the Gulf Stream current was running an unusual 4.3 knots (or 4.94 mph or 7.96 km per hour). Penny has been swimming at 2 mph with a constant 71-72 stroke per minute pace for nearly two days. Her plans and pace were on schedule before Mother Nature shifted direction.

The Gulf Stream, which can range anywhere from 5 to 50 miles offshore from Florida, started to hit Penny head on late into her second night. Before then, she was swimming steadily with favorable currents under tranquil conditions. Spirits ran high on her escort boat and among her ground-based logistics crew. Then the currents started to run south southwest, right into Penny’s path. At the time, Penny was making excellent headway in the north northeast direction towards Key West. She has previously encountered the Gulf Stream 22 miles off the coast of Cuba at the start, but it was flowing in the direction she wanted along her optimal course. As her team found out, predicting exactly where the currents will flow is exceedingly difficult. With the speed of the oncoming current at nearly 5 mph, Penny faced the impossible.

Even the fastest pool swimmers in the world for short distances do not swim at the speed in which the Gulf Stream was running into Penny. For every stroke she did, she was going backwards. But at night with her head down, she had no idea the true force of nature she was battling.

The mariners aboard, including Captain Bob Olin, his son Mitch, Captain Chris Holtslcaw and John Bollinger, conferred with her support team. They estimated she would need at least another 24 hours of swimming and face the possibility that the currents might not shift back to her favor. Her crew sadly broke the news to Penny that she was being pushed away from her goal. She processed the information for a few minutes, shaken emotionally and extremely disappointed. She had not been unaware of the situation and did not realize she was making negative progress in the pitch darkness of night. After taking in the news, she reluctantly touched the boat, then boarded it under her own power.

“She was heading towards Key West and actually losing ground when she was pulled. It would have been impossible to overcome the currents that were pushing her back. She made the decision herself when presented the news,” explained Chris. “She has been training 40 hours per week and on her computer for 30 hours per week, planning this attempt, so she was upset”

Despite dehydration, muscle soreness, numerous stings and the distance, “Penny was mentally alert the whole way. But it was the Gulf Stream currents that ultimately did her in.”

Nothing was easy about this swim. “She was hit many times by Portuguese man o war during the night on Friday and she saw a group of hammerhead sharks en route, but she never let up.”

Dr. William Korey of the Holy Cross Hospital in Ft. Lauderdale, Florida was onboard and immediately treated her as the Sunluver charged back to shore. “What she did was incredible. But her blood pressure was low, her lips and tongue were swollen with sores, and she was dehydrated and sunburned. It is very difficult for her to speak, but she was thinking clearly and her stroke and pace remained strong right to the end. There are few people who could have done what she did and survived,” explained the doctor who volunteered his time and equipment.

“She tolerated what others could not. It took her 4 days to recover from the same type of exposure last year in her Cayman Islands swim. Her mouth has sores due to salt water exposure and she also received several painful stings around her mouth, lips and face. When she got hit [with the Portuguese man o war], she screamed in pain but she kept on swimming.”

Chris added, “She is recovering, taking pain relief medicine for her body is sore, but she wants to get out of the hospital as soon as possible. But tonight, she will remain there. She may be ready to leave for home on July 6th.

At the end, as Chris explained, “Mother Nature had the final say, but I am sure we will hear from Penny again. The swim will not break her spirit, but it is too early to talk about her future swims right now. We are in awe of what she has done. I think she will be pretty proud of her swim after she is given the data.”

Photo shows Penny Palfrey on her Bridging The Cayman Islands swim of 2011.

Additional articles on this attempt are listed below: