Penny Smiles, But Others Do Not 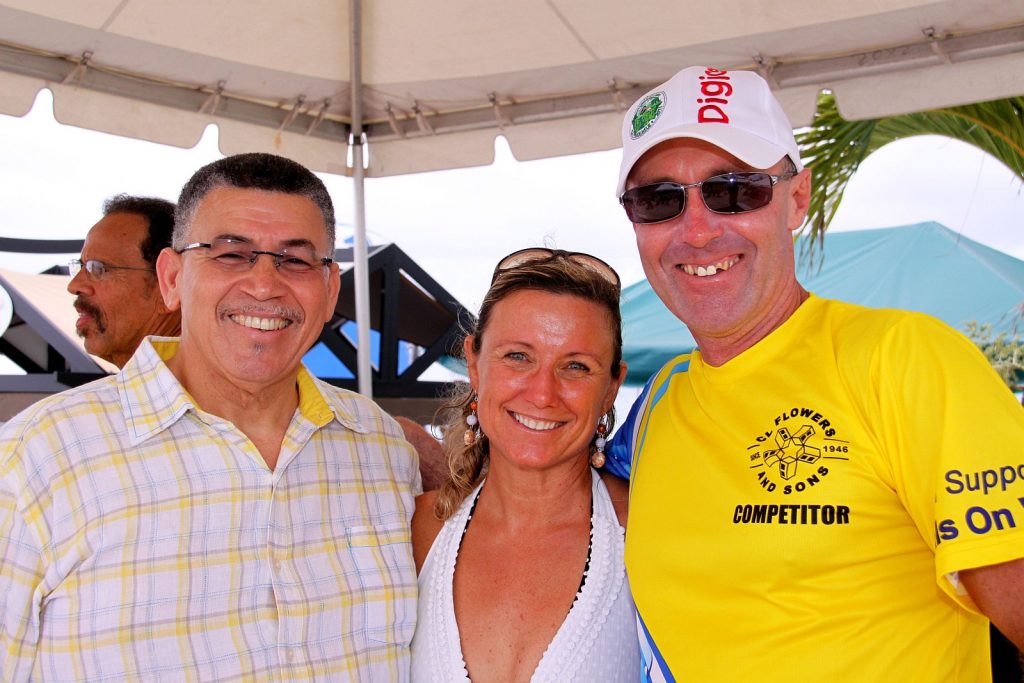 Less than a week from incurring the wrath of environmentalists and open water swimmers, Penny Palfrey recovered enough to receive awards from the Honourable W. McKeeva Bush, the Premiere of the Cayman Islands. Premiere Bush recognized Penny’s efforts in swimming between Little Cayman and Grand Cayman.

The awards were conferred at a ceremony immediately after the Flowers Sea Swim where Penny socialized with many of the 830 swimmers in the largest sea swim in the Caribbean to date.

While Penny was recovering from her 40 hour 41 minute swim over the last several days, The Daily News of Open Water Swimming received hundreds of emails and messages filled with numerous demands including the following:

1. USA Swimming and FINA make a stand against touching, harming and killing any kind of marine life by open water swimmers.
2. The Daily News of Open Water Swimming make a public statement that all swimmers must be removed from the water if there is any danger caused by marine life.
3. A public statement against the killing of sharks, any endangered species and any marine life by any humans including fish, shellfish and jellyfish.
4. Clarity on exactly what happened when three oceanic white tip sharks were brutally massacred by a machete held by one of Penny Palfrey’s support crew members.

All of these requests cannot be met by The Daily News of Open Water Swimming. However, we have been disappointed that people in the open water swimming community actually believe we advocate killing of sharks or any endangered species. This could be no further from the truth as we have long been strong advocates and supporters of the ocean environment and marine life.

We also believe that open water swimmers can be protected from marine life in various ways without killing of sharks and without resorting to getting out under very specific circumstances under the watchful guidance of experienced watermen who have a specific plan of action. We say this as a swimmer who has done several swims with sharks in the water and as a coach and support crew member.

We also wonder why environmentalists and open water swimmers believe that experienced support crew would support the brutal massacre of sharks in the vicinity of a swimmer. With the additional blood in the water, the killing of three sharks would not alleviate the situation, it would only lead to additional threats against the swimmer.

In previous blog postings, we have written what we saw first-hand while on Penny’s escort boat. Some readers were confused and disappointed with these postings. However, we fully intended to inform readers that we saw no sharks being killed and no evidence that sharks were killed. We officially informed the Cayman Islands government authorities in significant detail what occurred, including the witness of the Zodiac where the brutal killing of three sharks by machete allegedly occurred. We informed the authorities that we not only witnessed but also boarded this Zodiac after these alleged incidents. We witnessed fish (bait) and hooks, but we saw no evidence of blood. The size of the Zodiac was small and we did not observe any crew member dive into the water to attempt to cut or kill any sharks with any kind of cutting instrument.

Penny is one of those rare athletes who smile at and swim with sharks filled with admiration. When Penny has been approached by a Great White Shark off of the waters in Santa Barbara Channel, she smiled and watched the magnificent creature swim under her like a fast-moving submarine. And she has faced Great White Sharks more than once and trains nearly every day within close proximity to tiger sharks and numerous other sharks in her home base in Queensland, Australia. Penny’s crew all know very well of her composure in the water when sharks appear. These kinds of details and background are not considered by those who criticize Penny and her support crew.

But few swimmers are cool and calm like Penny. Most humans panic, freeze or thrash about, especially when faced with an oncoming shark or a Portuguese man ‘o war. While environmentalists and open water swimmers can be critical of these natural human reactions, we believe that the wide variety of reactions are inevitable. So while some individuals react in self-defense, others panic. While some swimmers freeze, others raise a fist. Everyone is different and one’s reaction is never quite known until face-to-face with marine life. USA Swimming even honored one of its Olympic swimmers, Gary Hall Junior who defended himself and his sister against a shark (read here).

That being said, Open Water Wednesday has extended invitations to prominent open water swimmers who are environmentalists so they can objectively discuss these issues. Some of the questions that will be asked include the following:

1. Describe why the actions of Penny Palfrey’s crew was wrong?
2. Should swimmers swim in locations where there are sharks?
3. If a shark appeared during one of your swims, what would you have done?
4. If a shark unexpectedly attacked one of your paddlers or kayakers during an ocean swim, what is the proper response?
5. If a shark unexpectedly appeared near you during one of your swims, what would you do in the case (a) there is no crew member or boat between you and the shark, and (b) there is a crew member and a boat between you and the shark?
6. What do you think of Shark Shields? Should these devices be used or should they be outlawed?
7. What should the open water swimming community do as a result of these incidents?
8. What can the open water swimming community do a a result of millions of sharks being killed for shark fin soup?
9. Should people who harm or kill sharks be prosecuted?
10. How far are we from such legislation?

Photo courtesy by Image by Spike.