Persistence Pays Off After 28 Hours and 44 Minutes 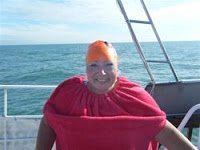 Persistence Pays Off After 28 Hours and 44 Minutes

Family, fans and friends from around the world followed Cobell’s swim via the Channel Swimmers Google Group and track her location via SPOT as Lance Oram and the crew of the Sea Satin patiently escorted her.

Her persistence, backbone, decisiveness, determination, doggedness and sheer grit in the cold water through the night and across the tides will encourage many for years to come.

As suggested by Forest Nelson, what is incredible is to compare the enormity of Jackie’s 28-hour swim with Philip Rush’s three-way crossing of 28 hours 21 minutes. Both, for various reasons, were incredible endeavors that demonstrated the majesty of the human spirit.

Graeme Schlachter recreated Cobell’s route across the Channel via for her SPOT tracking above.