Among an extraordinarily impressive field of outstanding open water swimming heroes, Bulgaria’s Petar Stoychev was voted as the 2009 World Open Water Swimming Man of the Year out of 18,024 votes cast by fans around the globe. Petar graciously said, “Thank you very much for the wonderful news. I am very happy with this award.” 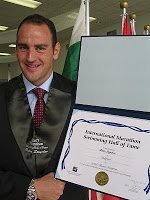 “During the year I was able to win 5 out of 8 FINA Grand Prix marathons (57K Santa Fe, 15K Sumidero, 30K Ohrid, 32K Roberval and 34K Magog) to rank first in the FINA rankings for a record ninth consecutive year. I also finished fourth in the FINA 10K World Cup rankings and was the first Bulgarian to be inducted in the International Marathon Swimming Hall of Fame. My achievements secured my place among the Ten Best Bulgarian Athletes of the Year (I was ranked sixth). Finally, I was elected in the FINA Athletes Commission, where I hope to be able to contribute for the development of marathon swimming. Thank you again for the great honor.“

Although the Award is not necessarily meant for the best athlete, it was clear that Petar is one of history’s best endurance athletes with a strong competitive edge, a constant hunger to improve and a heart of a champion.

We salute all the 2009 nominees who have enjoyed remarkable careers in the sport as athletes, coaches, promoters, race directors and administrators: