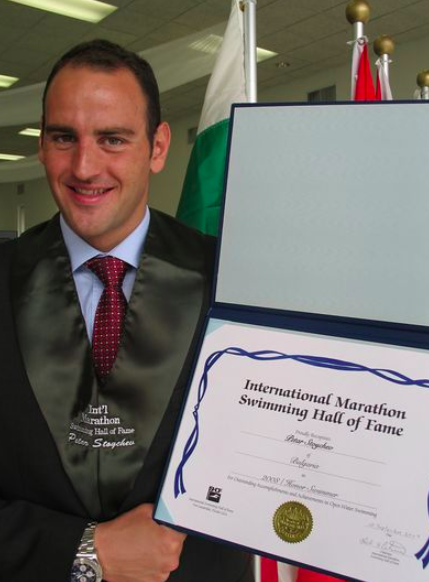 Ram Barkai of South Africa, Jonty Warneken of Great Britain, Henri Kaarma of Estonia, Ned Denison of Ireland, Richard Broer of the Netherlands are the board members of the International Ice Swimming Association.

Their recent announcement of the 2019 International Ice Swimming Association world championships in Murmansk, Russia increases the possibilities for an ice kilometer event to be added to the 2022 Winter Olympic Games.

The 2022 Winter Olympics, officially known as the XXIV Olympic Winter Games (French: Les XXIVème Jeux olympiques d’hiver; Chinese: 第二十四届冬季奥林匹克运动会), and commonly known as Beijing 2022, will take place in Beijing and in the neighboring Hebei province between February 4th to 20th.

Among the swimmers from 32 countries who are expected to be represented at the 2019 championships, one Olympian Petar Stoychev from Bulgaria may have the very real chance to compete in both the Summer and Winter Olympics.

What makes Stoychev’s possible participation uniquely rare is that there are 136 athletes who have competed in both the Summer and Winter Olympics – but a vast majority of these athletes competed in different sports. The most common combination among these dual Olympians is bobsledding and athletics, followed by cycling and speed skating. Other events competed in by Summer and Winter Olympians include fencing, track and field, sailing, ski jumping, and equestrian events.

Barkai explained, “Ice swimming, an increasingly popular sport, is gaining worldwide recognition. The championships in Arctic Murmansk will be an opportunity for Ice Swimming to be presented as an aspiring Winter Olympic sport.

Members of the International Olympic Committee and FINA will be invited to attend and assess its viability. Ice Swimming has the potential to become one of the most exciting winter sports in the games and hopes that they may be considered for Beijing 2022
.”

Stoychev who was most recently inducted in the International Swimming Hall of Fame was at the announcement along with Kate Steels-Fryatt who serves as the Chairperson of International Ice Swimming Association Great Britain, and Russian ice swimmer Alexander Brylin, Barkai and representatives from Murmansk.