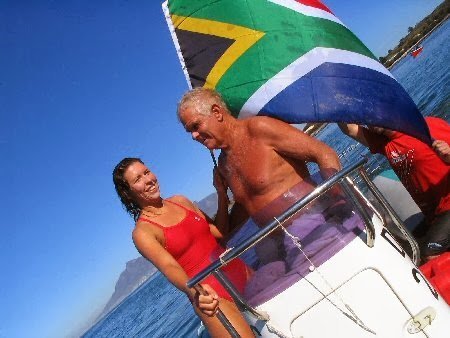 Their legacy of care, expertise and experience are renowned and their services highly sought by marathon swimmers around the world.

Similar to the piloting giants of the channel swimming world (David Whyte, Reg Brickell, Sr., Reg Brickell, Jr., Ray Brickell, Captain Leonard Hutchinson, William J. Long, Duncan Taylor, Brian Meharg and John Pittman), Peter Bales of South Africa (shown above and below with Carina Bruwer) is another renowned escort pilot of the open water swimming world. The chairman and one of the founding members of the Cape Long Distance Swimming Association, he has been piloting around South African waters since the 1970s.

Bales wears a number of hats, all very well. In addition to his piloting duties, he has served as a support crew, observer, administrator and organizer of many open water swimming events in South Africa and continues to play a major role in the most challenging solo swims in Cape Town and other areas in South Africa.