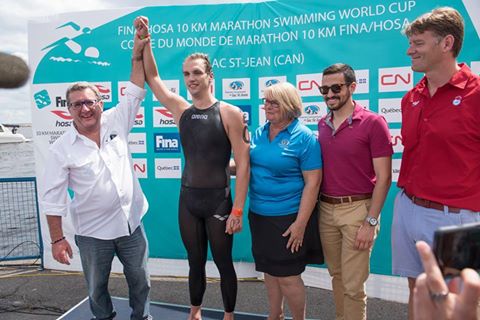 Guertin and Peterson separated from the lead pack at 3 km mark and were never challenged again. “To be back on the senior national team means everything to me right now,” Guertin said. “I missed the team for [the 2015 FINA World Championships] last year because I broke my hand during the selection [race] when I hit it on a buoy.

Today I dove in the water and took the lead from the beginning. I just felt good. I didn’t feel that made a push. It was just that when the waves started to pick up, I started to get a better lead, and I just tried to keep that to the end
.”

Weinberger said he was just past the 2 km mark when he encountered difficulty. “I’m very positive about this race. I was third in Hungary [at the last FINA 10K Marathon Swimming World Cup race on June 18th]. Fifth is not a bad position to be in, considering the competition I was in with, from Canada. They were 100%.

I kind of perfected my stroke during the race. On the far end away from the start and finish pontoon and the touch pad, there was a lot of chop and it helped my stroke. I had really good fitness. What happened in the race was I started having a breathing issue and couldn’t kick into my fast gear. I noticed an issue at around 1½ laps.

I know what I can fix. I’ll be better prepared for this sort of environment in Rio