Photography In The Middle Of The Sea 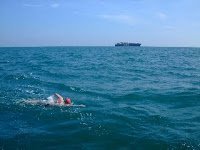 When we observe photographs of swimming doing an English Channel crossings, whether it is a solo attempt or a relay, there are generally two types of photos – either the swimmer in the middle of the Channel with a ferry or cargo ship in the distance or a swimmer crawling nearing or finishing upon the French shore.

So we asked experienced Channel hands why? T 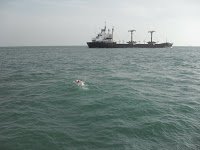 These are the answers we received:

“Photographing channel swims is a challenge I have found. Having a ship in the distance makes a better composition.

It’s hard to make those photos look interesting with all that ocean and the tiny swimmer even with telephoto,,” said Foundation for Women honoree Anne Cleveland who did a two-way English Channel crossing in 2004.

“I think that everyone who swims the Channel – is always a little wary about tankers in the Channel – especially the boat crews who support. When you actually get out there as crew yourself, it is great for the swimmers to have photos like this. I have several and for the swimmers albums, it is marvellous to have photos like this to remember – unless the swimmers are very close, they do not always see what passes them! It does make one (and many others!) realise how small we all are in comparison – and always makes a good story too as to how close the ships got,” said International Marathon Swimming Hall of Famer Sally Minty-Gravett of the Jersey Long Distance Swimming Club.

“This type of photo yin the English Channel is popular because it clearly portrays the fact that the swimmer is swimming in open ocean through a major shipping lane. Dealing with large ships and swimming through heavy shipping lanes is one of the potential hazards of this sport – particularly in the very busy English Channel. Including a ship in the background also adds perspective as well as a point of interest in the photo,” said Paula Selby of the Catalina Channel Swimming Federation who has traveled the world on assignment taking photos of marathon swimmers.

Are other reasons for these camera shots?