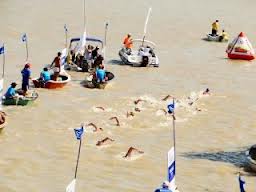 It was natural to wait. While the anxiety of find out what happened existed, technology and opportunities to relay the information were not available in the 20th century.

The younger generations of swimmers who take part in open water swimming can never imagine such a scenario. To them, a fax is plastic heap of plastic collecting dust in the garage. Stamps are bits of sticky paper that their grandparents use to send them birthday cards. Newspapers are only interesting if their own name and photo appears.

For the young swimmers, there is an instantaneous, visual feel to their experience in the open water community. A non-stop stream of photos, videos, updates, texts, and messages fed by mobile devices, Instagram, YouTube, Twitter, Facebook, iPhones, Skype, and iPads is what they know. For them, a world of faxes, airmail, and public pay phones is what is described in history books and museums.

In the 20th century, an athlete took off from their home and traveled to an open water swimming event. Perhaps they would call from a hotel or send a postcard with the results of their swim, but more likely, they talked about their swim face-to-face with their family and friends after they returned home.

Now there is information galore with tweets, videos, and photos not only from the swimmers themselves, but also from others at the swim or competition. To be unplugged, untethered from their friends and online network is unfathomable as it is stressful. And with mobile phones, they are no longer separated from their teammates, friends and family as open water swimmers were back in the 20th century. Physical separation is now substituted with virtual communications.

Swimmers are now always connected in ways that 20th century swimmers could never imagine. Just as there is no longer any significant degree of separation, there is also a pressure to keep feeding the information, photos, videos, texts, and tweets. This experience creates connectivity and a community where the swimmers feel welcomed and, in many cases, protected and appreciated.