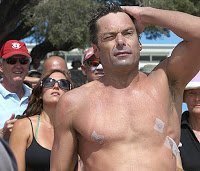 “I came to swim hard and challenge for the win, and I’m absolutely rapt I was able to do it,” said Deanne, a former pool sprinter who represented Australia in the 200-meter freestyle at the 1992 Barcelona Olympics.

“Last year, I led until the 18K mark and got swallowed up at the end so I learnt my lesson for this year. To set a goal and see it come together like that is very rewarding.”

Tim Hewitt, who won the event in 2001, was second in 4:43:47. A video of the race is here. 28-year-old New Zealander Louise Stevenson of New Zealand won the women’s race in 5:07:21. “It hasn’t really sunk in yet – it’s taken a lot of sacrifices the past three or four months so it’s satisfying to win. It was pretty rough out there. In the first 1000 meters, I got stung for buggery.”.

Among the 2,300 swimmers who entered the water swimming solos and in teams, Team Aussie Bum with Simon Huitenga, Heidi Gan, Jarrad Lawford and Sean Noone was the first team across the line in 4:18:59. Jessica Barclay and Paul Laver were the first pair to complete the due team race in 4:50:24 as every swimmer had to deal with moderate to heavy swells.

Photo of Deane Pieters by Matthew Tompsett of WAtoday.