Pilar Geijo Honored By The Hall Of Fame 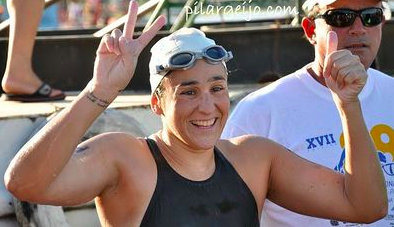 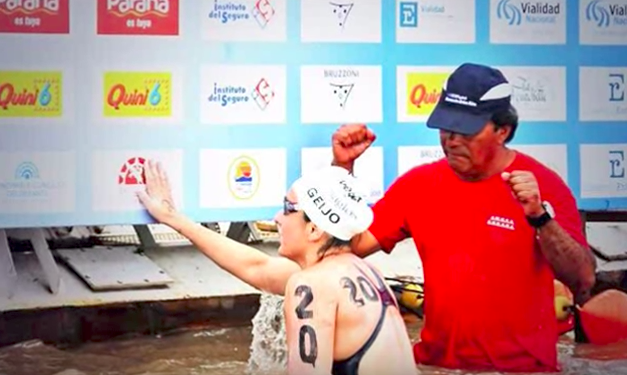 This year’s inductees are athletes who have completed incredible feats in the open water as well as exceptional humans who lead inspirational lives on dryland. Some achieve greatness in competitive events, some in solo channel crossings, some in unprecedented swims. While their greatest swims are publicly well-known, it is the relentless dedication and numerous hours they put in hard, solitary training that enable them to complete their swims in lakes, river, and seas around the world.

The Class of 2018 includes one of the world’s most dominant professional marathon swimmers in long events, Pilar Geijo of Argentina who has been competing at the world-class level since the previous century.

She competed in the first FINA World Open Water Swimming Championships in Honolulu, finishing 12th in the 2000 event and remains competitive in 2017, finishing 7th in the 57 km Maratón Acuática Internacional Santa Fe – Coronda in Argentina in 9 hours 8 minutes, 4th in the 32 km Traversée internationale du lac St-Jean in Canada in 7 hours 4 minutes, 5th in the 30 km Ohrid Lake Swimming Marathon in Macedonia in 5 hours 48 minutes, and 7th in the 16 km Maratona del Golfo Capri-Napoli in Italy.

She has completed – and won – several of these FINA Open Water Swimming Grand Prix events including four titles at the Traversée internationale du lac St-Jean (2010, 2011, 2014 and 2015), six titles at the 88 km Maratón Hernandarias-Paraná in Argentina (setting the record in 8 hours 34 minutes), 34 km Traversée Internationale du Lac Memphrémagog in Canada, and the 15 Copa Del Mundo FINA Maraton De Natacion in Mexico.

Over her prolific career, she has traveled all over Europe, Oceania, North and South America, Asia and the Middle East representing her home country of Argentina, voted as the 2011 World Open Water Swimming Woman of the Year.

She talked about her career:

Daily News of Open Water Swimming: How does it feel to be inducted in the International Marathon Swimming Hall of Fame – even though you have plenty of swimming left in your career?

Pilar Geijo: When I received a call from Ned Denison, one of the members of the International Marathon Swimming Hall of Fame, I couldn’t believe it. It was a big surprise and felt really happy; he was saying to me that I was going to be inducted in one of the places that I have always dreamed to be part of. When I was 16, I visited the International Swimming Hall of Fame with my father after competing in FINA World Open Water Swimming Championships in Hawaii in 2000. That place really impressed me. It was a big museum with a lot of history. I never forget when I saw a picture of Alfredo Camarero, an Argentinean swimmer who has been my role model. I saw a wall with his pictures and I said to myself, ‘I want to be here sometime.’ So imagine what this honor means to me. I can explain how big this dream was. I wrote a list with all my dreams some time ago. One of those dreams were be part of Hall of Fame. At that time, this seemed impossible for me. But now I am.

Pilar Geijo: It is difficult choose only one. I mean all of my races have impacted on me in same way. And I learned from each one of them. But for sure to swim and win the 88 km Maratón Hernandarias-Paraná was amazing. I won six times in a row. Six years in a row, who can I imagine that? Not even me. The longest race was 10 hours 40 minutes. After 6 hours, I feel if I were a fish. I was completing happy, enjoying, swimming fast, singing songs. I think I can reach an special state after some time swimming, a kind of meditation. Also, that race was my first victory in an international race. This race taught me to never give up, and to realized how much powerful and strong mentally I am. I broke all my limits.

Pilar Geijo: I think the toughest races were in lac St-Jean. One edition the wáter was completely cold. It was one of the coldest edition, it was 15°C and 14 swimmers did not finish in that 2011 race. After four hours swimming, I started to feel very cold and maybe the possibility to stop, but I couldn’t believe that I was thinking to stop if I were leading the race. So I imagined if my escort boat sunk in the middle of the lake and I was the only person who could swim to the shoreline and let somebody know about them so they can receive help. This was the story that I created in my mind and this motivation helped me to finish and win the race.

Daily News of Open Water Swimming: What was the closest race that you competed in?

Pilar Geijo: My closest race was in September this year at the Maratona del Golfo Capri-Napoli. That was my last race.

Pilar Geijo: I work 10 sessions swimming during a week with an average of 7.5 km per session. Also, three times a week I go to the gym.

Daily News of Open Water Swimming: Your coach is always at your side during your races. How important is he to your success?

Pilar Geijo: Diego Tricarico has been very important for all my sports career. Definitely all of this could not have been possible without him. He taught me a lot of things and a point of view about life that helps me in my swimming. He taught me that winming was not easy, but it is neither impossible. And he taught me that winming a race is not the most important thing; it is much more important the way and the journey that we venture every day. He helps me to believe in myself and feel very confident.

Daily News of Open Water Swimming: Do you have any sponsors?

Pilar Geijo: I have private and public support. I have Gatorade, New Balance, Speedo, Weber Saint Gobain, Pulver, Dermaglos and I have the support of my national government too.

Daily News of Open Water Swimming: What are your favorite foods and drinks to take during marathon races?

Pilar Geijo: I love Gatorade, the blue one, Ice Cool. It’s my fav.

Pilar Geijo: I will attempt to cross of the river Río de la Plata in Argentina, from Uruguay to Argentina in January.

Daily News of Open Water Swimming: What kinds of things do you think about during your marathon races?

Pilar Geijo: Sometimes a lot of things and other times, I think of nothing depending the race and situation.

“Pilar is a constant on the professional marathon swimming circuit for nearly 20 years. The longer, the rougher, the colder the water is, the better she becomes. She just has that tough mindset and aggressive never-give-up attitude that the best marathon swimmers have,” said Steven Munatones. “But when she gets out of the water, her bright smile emerges and she carries on as one of the world’s best ambassadors of the sport, both on dryland and in the water.

She was selected as an Ambassador in Argentina for the World Ocean Day organized by United Nations to raise awareness of marine conservation
.”

“Pilar and the other new members of the International Marathon Swimming Hall of Fame emulate those exceptional 269 forerunners already enshrined in the Hall of Fame. Since the class of 1963, our marathon swimming inductees from around the world have received the ultimate marathon swimming recognition. They have been immortalized with their names inscribed on the IMSHOF Sea Goddess, our ‘symbol of the sea’,” explained Chairman Christopher Guesdon.