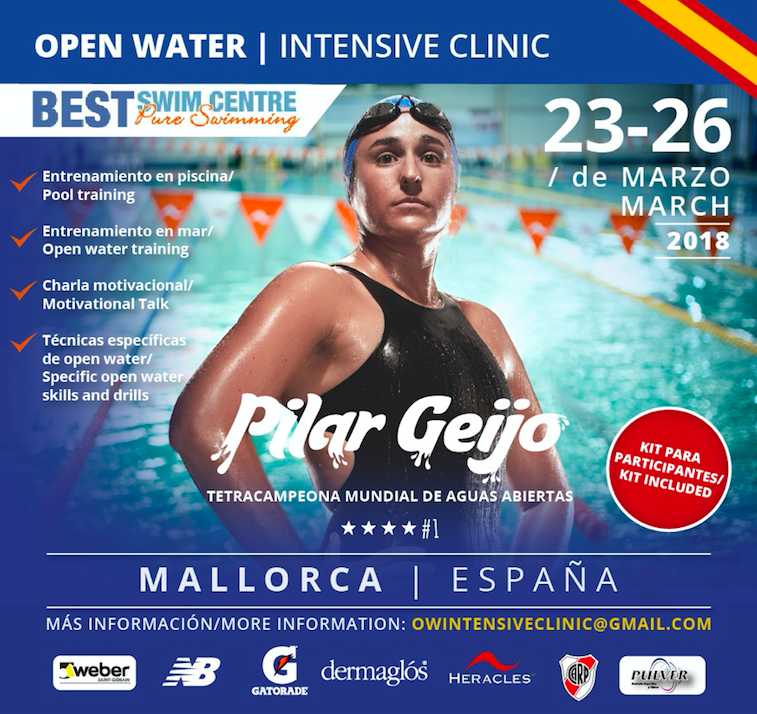 Just before being inducted in the International Marathon Swimming Hall of Fame in England as an Honor Swimmer in the Class of 208, Pilar Geijo will hold a bilingual (English + Spanish) Open Water Swimming Intensive Clinic in Colonia Sant Jordi on the Spanish island of Mallorca between March 23rd – 26th.

With sessions in the pool and open water, Geijo will augment her clinic with motivational talks and technical drills for open water swimmers.

Geijo is a four-time FINA UltraMarathon Swim Series world champion (2010, 2011, 2014 and 2015 with runner-up finishes in 2009, 2012 and 2016) who has finished in the Top 3 in 35 different international marathon swims including the Maratona del Golfo Capri-Napoli, Traversée Internationale du lac St-Jean, Maratón Hernandarias-Paraná, and received the World Open Water Swimming Woman of the Year award in 2011, the Olimpia, Clarín y Jorge Newbery de Oro in Argentina.

“With her many years of racing and swimming in cold water, warm water, calm conditions, and turbulent conditions under sunny skies and in the rain among the best professional marathon swimmers in different continents, rivers, lakes, seas and oceans around the world, Pilar has a depth of experiences and different perspectives that are invaluable for swimmers to learn,” said Steven Munatones. “She is also deeply kind, incredibly positive and personable so her clinic will be a great opportunity for all those who participate.”

• 3 nights at a 4-star hotel with half board located 6-7 minutes walking from the pool
• Four 2-hour swim training sessions including 3 pool sessions at the BEST Centre, a 50m outdoor pool + 1 open water session in the Mediterranean Sea with stretching and mobility specific for swimming
• A motivational talk and time for Q&A with coffee and snacks
• Teaching of freestyle technique, including open water-specific skills and drills for open water swimmers and triathletes
• Training kit
• Lunch on Monday with raffles and prizes

For more information and to register, email [email protected].