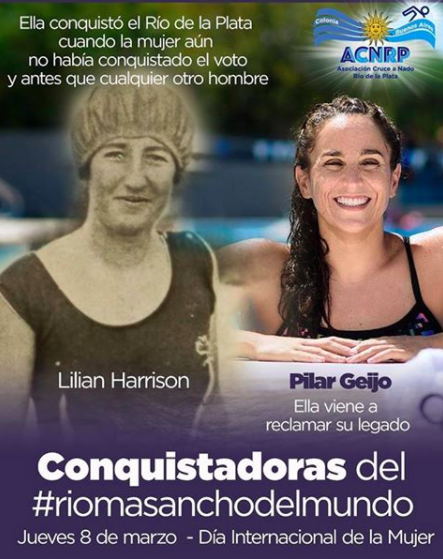 As an aquatic celebration of the international Women’s Day, Pilar Geijo will attempt a 42.2 km crossing of the Río de la Plata from Colonia Del Sacramento in Uruguay to Punta Lara in Argentina on March 8th.

The recent International Marathon Swimming Hall of Famer will attempt to replicate the successes of fellow Argentina marathon swimmer Damián Blaum who crossed the Río de La Plata in 9 hours 6 minutes in February 2018 and Lilian Harrison who crossed in 1923 at the age of 20 in 24 hours 19 minutes.

Until Harrison completed the first crossing, there had been nine unsuccessful attempts by swimmers Enrique Tiraboschi, Luis Garramendy, Elio Perez Romero Maciel and Vito Dumas. Dumas was in the water the longest at 25 hours 17 minutes, while Maciel had to abandon his attempt only 3 km from Berazategui, his point of arrival.

Attempts are organized by the Asociación Cruce a Nado Río de la Plata (ACNRP), the governing body that organizes and ratifies crossings of the Río de la Plata, the widest river in the world.