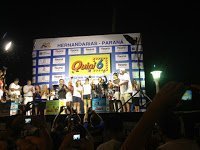 After experiencing illness at the 15 km Rosario stop on the opening leg of the 2013 FINA Open Water Swimming Grand Prix, Pilar Geijo was not herself in Rosario or at last week’s 57 km Maratón Acuática Internacional Santa Fe – Coronda race.

But all was righted for Geijo at the world’s longest competitive race from Hernandarias to Parana, the 88 km Maratón Hernandarias-Paraná. She regained the top spot at the third stop on the Grand Prix circuit.

Geijo won the 88 km FINA Open Water Swimming Grand Prix race over runner-up Olga Kozydub of Russia and third-place Esther Nuñez of Spain. Soon after the race started, the pace picked up fast and the traditionally large pack split up quickly. This played into the strategy of Geijo who had finally recovered from her earlier illness.

Among the 24 swimmers (14 men and 10 women), Geijo finished only 10 minutes behind fellow countryman Luciano Sales Rubio who swam a 9:39:42 – and less than a half a second over second-place Kozydub.

The race between Hernandarias and Parana was the third and last in Argentina. The series now moves to the northern part of the American continent, with the next three legs in Mexico and Canada (Cancun, Lac St-Jean and Lac Mempremagog, before concluding with two events in Europe – Ohrid in Macedonia and Capri-Napoli in Italy.