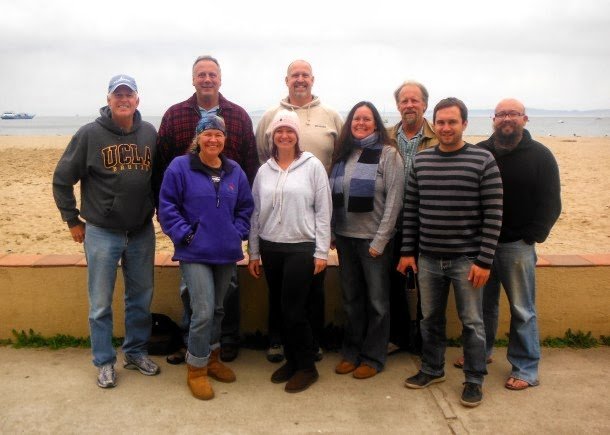 That comment is made frequently about good swimmers by their less aquatically-oriented friends on terra firma.

It certainly applies to Evan Morrison, co-founder of the Marathon Swimmers Forum.

The Princeton University graduate has turned his life-long passion for swimming into a lifestyle…and bringing many more like him along for the swim.

Whether it is bumpy and lumpy in a rough ocean, or cool and calm in a tranquil lake, Morrison brings youthful energy and a sharp intellect to the sport where he feels so comfortable.

And with good reason.

“I was born with a dislocated left hip, medically known as congenital hip dysplasia.

With a timely diagnosis, this wouldn’t have been a huge issue, but unfortunately the problem went unnoticed for the first 18 months of my life. By that time I had done considerable damage to the joint. I had four major hip operations by the time I was 12
.”

The fortitude that Morrison demonstrated as a marathon swimmer in the Swim the Suck, Tampa Bay Marathon Swim, Manhattan Island Marathon Swim, Catalina Channel, Ederle Swim and Santa Cruz Channel was also demonstrated early in his life. “Swimming was one of the few activities where I wasn’t limited by my hip. I learned to swim at the age of 3 and started competitive swimming at 7.”

But the road to the marathon world took an unanticipated turn. “The operation when I was 12 allowed me to live fairly normally through middle school, high school, and college. I could not play any contact sports or do extended running, but I could get around reasonably well, and most importantly – I could swim.

In my mid-twenties I started having increasing pain due to the deterioration of cartilage in my hip. I started off with ibuprofen, then went to increasingly massive doses, then prescription nonsteroidal anti-inflammatory drugs like Vioxx and Celebrex. But then I couldn’t take it anymore and went to the student health center at Stanford. Within a few weeks, I had a surgery scheduled at Stanford Medical Center for a total hip replacement. This happened when I was 25
.”

After the surgery, Morrison returned to swimming with the Stanford Masters Swim Team even before he was allowed to walk. His passion knew no boundaries. “I used my crutches to get to the edge of the deck, then sort of flopped into the pool. It was great,” he recalled with great appreciation.

After his road back to recovery, he stuck with the pool for another three years. But then he discovered the open water and has never looked back. “My hip feels great. No contact sports for the rest of my life, but I’m pain free and can walk, hike, and swim to my heart’s content.”

To a certain extent at least. For he acknowledges and accepts the sacrifices that comes with marathon swimming. “Like any ultra-endurance sport, pain is just part of the game when you are swimming across a channel. Because pain is inevitable, the question becomes: How do we deal with it? How do we manage it? I see an interesting subtext that is actually quite common among life-long marathon swimmers: masochism or the pleasure in pain.“

For someone who had to deal with so much pain in his young life, Morrison remains profoundly observant. “Masochism is a great strategy for dealing with the pain of a marathon swim. If we embrace pain as inevitable and even – dare I say – pleasurable – then it cannot defeat us.”

In a special way that distance swimmers can appreciate, Morrison relishes in the realm of pain, willingly accepting and embracing discomfort levels as a competitive age-group swimmer. “In my youth I trained with a talented, tough group of distance swimmers including [Olympian] Mark Warkentin. We learned early on the rewards of hard work, and came to see pain in almost a positive light. [Therefore] my transition to marathon swimming as an adult was relatively smooth, in large part because I approached swim training with a certain sense of masochism from an early age.”

The pleasure and pain, coupled with a deep sense of purpose and passion, that Morrison possesses vis–à–vis marathon swimming are shared by his colleagues on the innovative Santa Barbara Channel Swimming Association. Along with Jim Fitzpatrick, Scott Zornig, Lynn Kubasek, Cherie Edborg, Theo Schmeeckle, Jane Cairns, Dave Van Mouwerik, Evan Morrison and Rob Dumouchel (shown left to right in the photo above), the Association was nominated for the 2913 World Open Water Swimming Offering of the Year for its progressive action in the world of channel swimming.

Its nomination reads, “Frequently visible from the mainland, the 8 Channel Islands of California are increasing looming large in the mindset of channel swimmers. Channel swim courses between the mainland and among the islands present possibilities that are capturing the attention of the open water community. While decades younger than other channel governing bodies, the Santa Barbara Channel Swimming Association is pushing the envelope of what and how channel swimming governance can be. In 2013, its board of directors has instituted a new rules and standards including the elimination of drafting off escort boats, the use of swim caps, and the discarding of disposable cups. For its far-forward vision of a responsible future of the sport, for its growing reach among the channel community, and for its passionate group of volunteers, the Santa Barbara Channel Swimming Association is a worthy nominee for the 2013 World Open Water Swimming Offering of the Year.

Other nominees for the World Open Water Swimming Offering of the Year include a variety of products, services and concepts in the open water swimming world: