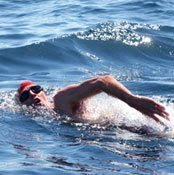 Several swimmers will attempt the various channel swims of the Santa Barbara Channel:

“There are eight islands off the Southern California coast of which the most famous is Catalina. While over 170 swims have taken place between Catalina Island and the California mainland, swims from the other islands have not been so common.” 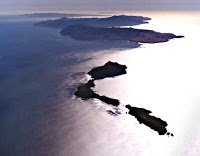 “In 1972, Cindy Cleveland swam to Anacapa Island and back. Since then, there have been 29 successful solo swims by 25 different people and 14 relay swims off these islands. The mission of the Santa Barbara Channel Swimming Association is to document swims from, to, between and around the 7 channel islands which the Catalina Channel Swimming Federation does not represent.”

Scott provides an excellent history of the islands:

Anacapa Island was first conquered by Cindy Cleveland in 1972. Nick Caine set a time record of 5:03 in 2008. This island in second to Catalina island in successful swims with 17.

San Clemente Island offers a 60+ mile swim that has been completed only once by the relay team of Brendan Halfman, Mike Suttle, David Yudovin, Craig Taylor, Jim Fitpatrick and Scott Zornig in 2002, taking 33:08 to finish this swim.

San Miguel Island has only been completed once by Penny Palfrey in 11:29.

Santa Rosa Island has only been completed by Mark Lewis who did his 15:46 solo swim in 2008.

The first inter-island swim was completed by Scott Zornig in 2007 when he swam from Anacapa Island to Santa Cruz Island in 2:18.

Lots of islands and lots of opportunities.

Photo by W. Dewey shows the northern Channel Islands(front to back) of Anacapa, Santa Cruz, Santa Rosa and San Miguel.