Plunging In The Bay Of Plenty To Honor Jed Roberts 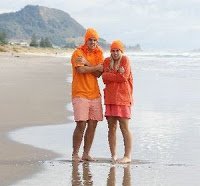 Ashley Cochrane of Mount Maunganui College in New Zealand, together with Jackson Edwards, are hosting a Polar Bear Plunge on June 27th in the Bay of Plenty on the North Island of New Zealand.

They are organizing the charity event in order to help raise money and awareness for the Leukaemia and Blood Foundation, after fellow student Jed Roberts died from his 19-month battle with leukaemia in 2011.