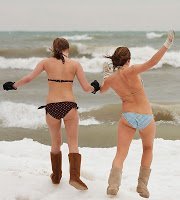 Bikinis and board shorts. Sunglasses and funny hats. These are usually not the attire of competitive open water swimmers. However, Polar Bear Swims change the normal open water swimming equation.

Thousands of people gather at the shorelines around the world, often to enjoy a dip in relatively or extremely cold water and donate some money to charitable organizations.

The Polar Bear Swim tradition was started by Bernarr Macfadden, considered the Father of Physical Culture and the founder of the Coney Island Polar Bear Club in 1903.

Judging by the thousands of extreme swimmers around the world, Bernarr’s belief that a dip in the ocean during the winter enhances one’s stamina, virility and immunity seems to be gathering more adherents.

Certainly, from the multitudes of people participating in Polar Bear Swims around the world, there will be many who will begin or continue their open water swimming careers throughout 2012…with no end in sight.