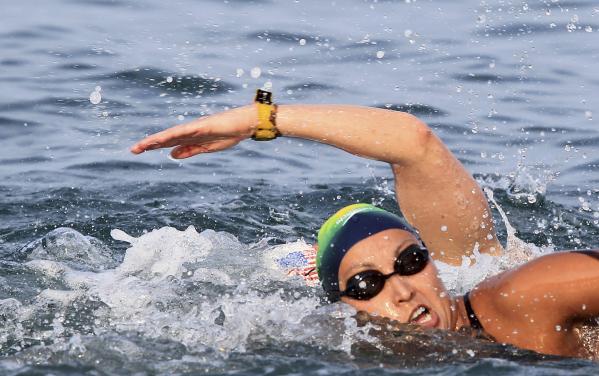 As predicted, the 52 women from 32 countries are wasting are no time. At the start of today’s 10 km world championship race in Barcelona, the women are characteristically efficient, focused, and fast.

None perhaps more so than 2-time Olympian Keri-Anne Payne. After marriage, a lay-off, and the disappointment of her fourth place finish in the 10K marathon swim at the 2012 London Olympics, Payne is back and swimming well.

But so is her arch-rival Éva Risztov, the Hungarian who upset Payne in London (shown drinking).

Taking a page out of the British playbook, Risztov blasted out towards the front and pushed the pace throughout the 10 km 6-loop race in the Serpentine last summer. This summer in Barcelona, she is sticking to the plan under the flat-water, no-wind conditions this afternoon.

Right from the start, the two superstars looked streamlined and confident in their lead-from-the-front strategies, navigational skills, and tactical plans. But unlike London’s relatively straight 6-loop course, the Spaniards laid out a more technically difficult course with many more turns that place demand on the women’s navigational IQ and ability to position and pace themselves for 2 hours.

All the expected front-runners are sticking to their game plan. Christine Jennings, Angela Maurer, Melissa Gorman, Olga Beresnyeva and a whole crew of fast-flying women are cruising behind the Hungarian and British Olympians during the first half. The women swam the first 2 km at around 24 minutes to give an idea of their speed and intent to make this race hurt (aerobically).

Relatively speaking, the scrum at the feeding platforms was mellow and the swimmers separated themselves in an orderly scramble in order to get their feeds in the sweltering conditions (30ºC air, 26ºC water was reported). Yet yellow cards have been called with the first given to Poliana Okimoto of Brazil.

At the 5.1 km mark, Risztov hit at 59:39 with others like the Italian pair of Martina Grimaldi and Rachele Bruni moving up on the heels of the leaders.

The first half was like the first few scenes of a drama. But the second half was when the real drama began. The lack of winds in the first half transformed to choppy waters in the second half. The pack started to break up under the relentless pace set forth by the Olympic champion Risztov. Kalliopi Araouzou, the teammate of her better known Greek teammate Marianna Lymperta, moved up to the leaders on the third loop.

As Araouzou surged forward, much of the lead pack broke apart as the water churned up from the steadily increasing winds and swells. The speed of the thinned-out lead pack was impressive with Payne and crew surrounded by a mass of officials and media in a tight flotilla on either side of the women. Whistles were blown, yellow cards given, and the physicality started to take its toll as the pack hit 6,000 meters in 1 hour 18 minutes.

Araouzou hung tough with the superstars of the sport with every intention to replicate the Greek victory of Spyridon Gianniotis in yesterday’s men’s race. Jockeying continued as Ana Marcela Cunha of Brazil, as intense as athletes come, made her presence known in the front. Surge and sprint, surge and sprint, the endless attacks lead to the pack being reduced to Araouzou, Risztov, and Payne with 30 minutes to race. Araouzou would move and Payne would counter. But the pack lurked behind at every stroke. There would be no early breakaway in today’s race.

Chop and swell. Up and down. Left and right. The women all went at each other like heavyweights taking punches directly to the gut and head. Cunha, Araouzou, and Payne were at the head of the arrow, but 14 more women were drafting right behind with hearts pumping wildly and lungs screaming for air. The pain of pushing must have been nearly unbearable. As the women turned back into the port for the final sprint, it was anyone’s race to take control.

Cunha moves, Payne fades. Then Maurer moves up together with Risztov and Poliana Okimoto of Brazil. Like musical chairs in a desperate game, the movement within the pack was unpredictable as the crowds on the coastline went wild. Then the Brazilian pair turned on their jets – Cunha and Okimoto – as they have so often done together both in domestic Brazilian competitions and in international races. But the race was not over yet as 37-year-old Maurer, a veteran of dozens of championships and newcomer 15-year-old American Rebecca Mann hung closely behind the South American duo in the second tier with less than 200 meters to go.

But it was Brazil’s day today. Okimoto, one of the most slender and thinnest women at these championships, kept pressing ahead faster and faster. With a tremendous kick, she touched out her rival for a 1-2 Brazilian finish just ahead of Germany’ venerable veteran Maurer.

Like Gianniotis did in the men’s race yesterday, both Okimoto and Cunha played their cards right. They pushed when they had to and they made it hurt when necessary. It was a race of champions, from top to bottom. But the pair from Brazil swam extraordinarily well and courageously to stand proud on the world 10 km podium today.

The results show how close and how competitive these women were in one of the most competitive races, top to bottom, in FINA open water swimming history: