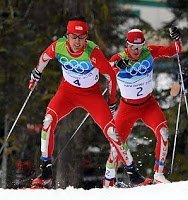 The similarities between short-track speed skating and competitive open water swimming is well-established.

Billy Demong of New York and Johnny Spillane of Colorado finished 1-2 finish in the Nordic combined large hill competition. This success of the upstart Americans was surprising on the world’s scene, but like many things in the Winter Olympics, a bit of luck and years of intense training and mental focus played a part.

After the ski jump competition, Demong started the 10 km cross-country ski race 46 seconds behind the leader. Quickly into the race, Demong caught Spillane and Bernhard Gruber of Austria. They battled over the rest of the course as bad weather and bad luck hampered the efforts of their top competitors.

“It’s like a lottery. Some guys got good conditions, some others terrible conditions,” explained World Cup leader Jason Lamy Chappuis of France. His observations sounds similar to the conditions faced by channel swimmers and professional marathon swimmers.

But what was most intriguing was the selflessness and teamwork displayed by Todd Lodwick who used his smarts and his positioning to help his teammates to the Olympic podium. “Once I saw [Billy and Johnny] pull away, I jumped in front [of the chase group] and tried to slow down the pace.”

Lodwick’s quick-thinking racing decision helped set the stage for his teammates’ victory – and it reminded us of similarities in competitive open water swimming conditions.

At the halfway point, Spillane was in front will Demong and Gruber right behind – within a second – but the chase group was a distant 41 seconds behind. With a quarter of the race to go, the lead trio were 49 seconds ahead and the Olympic gold, silver and bronze were theirs to fight over.

Similar to competitive open water swims, there were lead changes and drafting.

Spillane slipped and fell going around a curve at the 8 km mark as he was drafting in Demong’s slipstream. Gruber briefly moved into second, but Spillane came through with a finish spurt in the final 1 km. But throughout the race, Demong and Spillane took turns trading the lead and using tactics they learned while doing bicycle intervals in France during training last year: accelerating and times, decelerating at others, a tactic that eventually overwhelmed their Austrian opponent.

But in the finest of Olympic spirit – very much like the camaraderie shown in the open water – there was plenty of love shared by the three American teammates.

Spillane smiled as he watched Demong win gold, “Whoever was first and whoever wasn’t second didn’t really matter that much. Skiing into the stadium down that final stretch was quite a bit of fun.”

Demong reiterated, “I don’t think either of us really cared which one was first or second. I could see that Todd, in his own way, was doing a job for the team, and not attacking. He was just always at the front, covering those strong guys. It shows again that we operate on a team basis..”

Lodwick later summed up his sport – and the sport of open water swimming – with a shrug of his shoulders, “It’s an outdoor sport. [You] can’t really control nature. We just have to deal with the conditions that we have.”