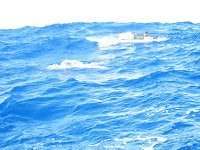 Penny Palfrey, one of the nominees for the 2010 World Open Water Swimming Woman of the Year, will take on the monsterous, humungous 72-mile Kaieiewaho Channel next week, probably around the November 8th – 11th window due to some favorable winds (Kona winds that help reduce the surface chop around the Hawaiian islands).

Her swim is all the more remarkable because she was defeated earlier this year by a pod of Portuguese man o war on her 12-hour swim from Oahu to Kauai (see video below). Despite understanding the pain that comes with a massive amount of venom that entered her system on her first attempt, she returned to Hawaii to attempt one of the most challenging swims in open water swimming history.

Penny will extend herself longer in tougher conditions than most anyone in history. She will face sharks, Portuguese Man-o-War, swells of unimaginable size in the middle of the largest body of water on Earth. 115.8 km – a distance more than the distance of the English Channel, Catalina Channel, Strait of Gibraltar and Cook Strait combined.