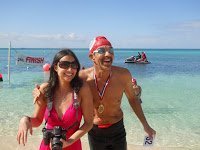 World-class events get a lot of pre-race publicity and build-up.

The pre-race activities help boost participation numbers, helps swimmers to feel motivated, and gets the media involved – all very positive long-term goodwill that benefits the race.

For the Flowers Sea Swim and the Bridging The Cayman Islands swim, Dara Flowers-Burke and Steven Munatones talk on TV, explaining a bit about open water swimming.

Governor Duncan Taylor CBE said, “I am very excited by Penny’s attempt to take on the unprecedented swim from Little Cayman to Grand Cayman. The feat speaks for itself: an incredible and daunting challenge. As an open water swimmer myself I welcome the fact that Penny has decided to attempt this historic marathon swim in the Cayman Islands. This will bring excellent publicity to the Cayman Islands as a beautiful tourism destination and promote our growing reputation as a destination for sports tourism. It also brings a welcome extra dimension to the world famous Flowers Sea Swim this year.”