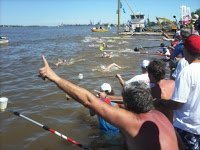 The data proves that the two pro circuits are global in nature, attract athletes from around the world who swim several races each and are representative of the increasing number of amateurs who do marathon swims.

2009 FINA 10KM Marathon Swimming World Cup circuit (men)
• 12 races on the circuit were attended by 162 men from 38 countries.
• There were 306 individual swims (i.e., number of total swims completed by swimmers).