Professor Katz Squared In The Water 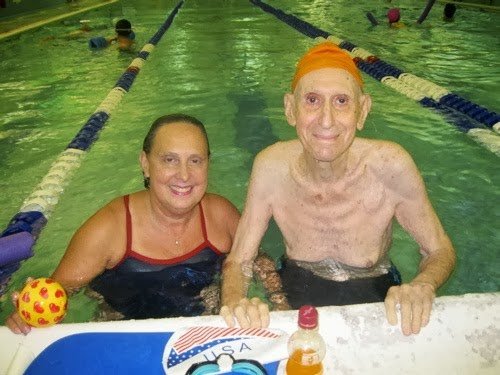 Dr. Jane Katz is a renowned educator of all things aquatic, from synchronized swimming to open water swimming.

Lauded by FINA and recanted honored by the International Marathon Swimming Hall of Fame, Dr. Katz got her start in swimming from two very familiar sources: her father and mother.

Professor Leon Katz is an electric engineer and a college educator who has made swimming his avocation for 6 decades.

From the time as a college undergraduate at the City College of New York in the 1940s to his years in retirement at the Sol Goldman 14th Street YM-YWHA, Professor Katz has devoted his life to sharing his passion of swimming with others. He worked together with Dorothea, his wife of 55 years until her passing in 1997, Dorothea, teaching swimming and supporting age group swimming while competing in masters swimming competitions.

But his start in aquatics was inauspicious. Frankly, it was downright scary. But after being rescued from a near-drowning accident at the age of 14, Professor Katz made it his mission to see that others did not face the same fate. As his daughter Jane writes, “He chose to return the life-saving gift of swimming to the multitudes around him. His volunteer activities include developing community swim teams like the Lower Eastside Neighborhood Association and East New York Y, strutting adult swim fitness programs, and providing water rehabilitation exercises for injured war veterans long before hydrotherapy was in vogue. Perhaps his most extensive community service was his part in implementing the New York City Department of Parks Learn-To-Swim Program which kept thousands of New York City boys and girls in the swimming pools and off the troubled city streets.”

Additionally, he conducted swim and water exercise programs for people with special needs and was honored for 40 years of volunteer service by the Red Cross in 1987.

And his heart continues to be where his swimsuit is: in the water. “My father has continued to coach a fitness swimming team for adults [as he enters his ninth decade]. Perhaps his greatest joy is having his four children, including his three daughters and his son, an NCAA champion, join in with his four grandsons, one granddaughter and a great grandson for a family swim.”