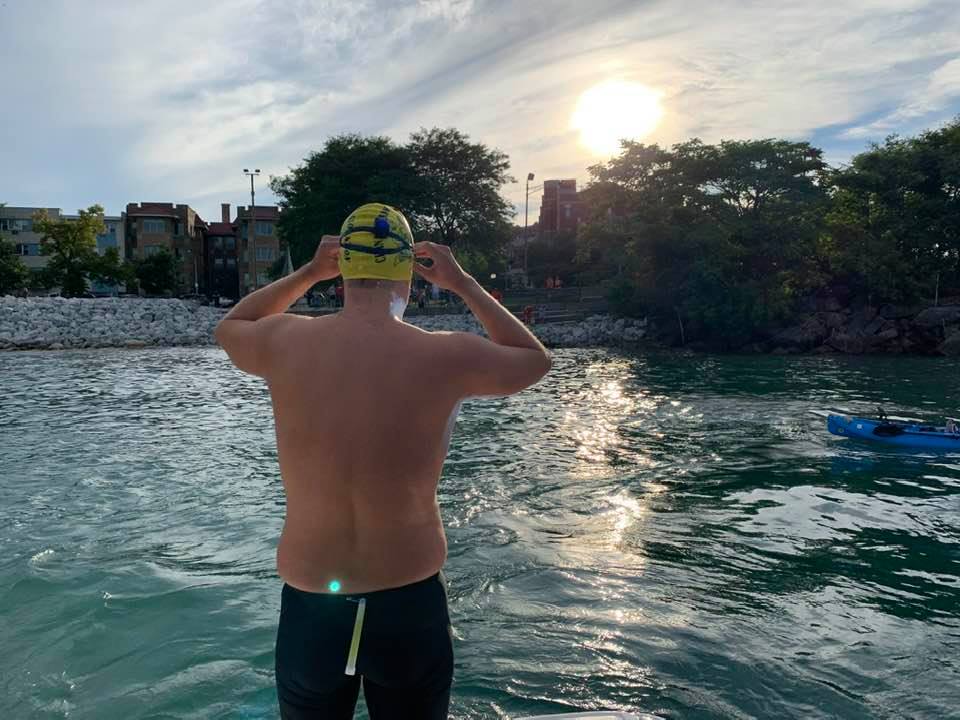 Will Dichtel is one very intelligent swimmer. And the 41-year old knows the open water. He is the Robert L. Letsinger Professor of Chemistry at Northwestern University and 2015 MacArthur Fellow, which recognized his invention of materials that remove toxic pesticides and industrial pollutants from water.

In 2008, 44-year-old Marcia Cleveland became the first woman to complete the 42.1 km Chicago Skyline Swim in Lake Michigan in 12 hours 49 minutes together in a tandem swim with David Blanke and Chris Layton.

The coastal course runs the length of the city of Chicago in the lake.

Cleveland returned to her record-setting swim when she served as an observer to Professor Dichtel who swam the 42.1 km Chicago Skyline Swim course, finishing in 12 hours 27 minutes 50 seconds. Cleveland reported, “He started on Tuesday at 6:32 pm at Juneway Beach and finished on Wednesday at 7:00 am in Calumet Harbor. Will’s time established a new overall record and men’s record.”

She explained why the swim is conducted at night, “The reason this swim is overnight is that there is less boat traffic and wind, both of which contribute to calmer seas for the swimmer. It will not be 100% dark – there will always be some ambient shore lights and some lights from the boat. Will was able to see the boat, crewmates, and any boats/swimmers nearby. The darkest part of this swim is between Grant Park and ~ Promontory Point/Museum of Science and Industry. The halfway mileage point of this swim is Shedd Aquarium/Soldier Field.”

“That is one great thing that is often done in the sport of open water swimming,” commented Steven Munatones. “It is not rare for record-holders and pioneers of channel swims and marathon swims to subsequently help those who come after them – and who end up breaking their own records.”