Protection Against Stingers Splits Down The Middle 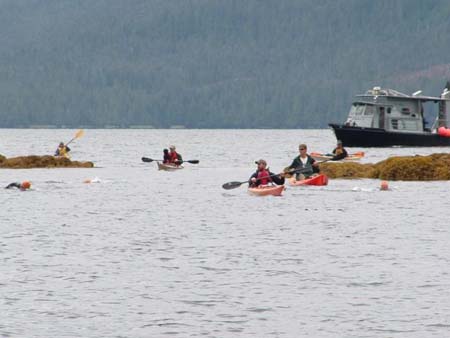 In the Marathon Swimmers Forum, Evan Morrison of the Santa Barbara Channel Swimming Association analyzed the opinions and survey results of 175 former, current or aspiring marathon swimmers from around the world. His analyses are posted here.

It was very interesting snapshot of the community that is estimated to include at least 710 channel swimmers and 6,500 marathon swimmers in size. Morrison did an excellent job analyzing and presenting the information.

Admittedly, our view of the sport of open water swimming is always taken from the perspective of safety. From our perspective, nothing reigns more importantly than safety although we understand and appreciate how some athletes can push themselves to levels beyond which we can comprehend. We have swum near too many sharks (tiger off Oahu), been stung too many times (from Mexico and the Caribbean to Hawaii and Australia), been at races where people have died (Acapulco and Grand Cayman), seen too many people go into convulsions or experience paralysis due to jellyfish stings (Hawaii and Cuba), been hospitalized once too many times (Atlantic City), and seen or heard of too many swimmers who experienced hypothermia or hyperthermia to think otherwise.

So we were quite pleased to learn of Morrison‘s analysis that the marathon swimming community agrees that substances or devices that protect the swimmer against dangerous marine life (e.g., sharks and jellyfish) – but unambiguously do not enhance performance – are acceptable. But as Morrison states, there remains controversial items in the sport of marathon swimming from stinger suits and swim streamers to bubble caps and shark divers.

Morrison explains his personal perspective, “If an item is controversial, it cannot be considered “approved by the sport of ocean swimming.” At best, it might be considered a “local exception” to a more universal set of rules – for example, the use of streamers in Japan. If an item is controversial, it is in some way approaching a line in the sand. In marathon swimming, if you’re flirting with this line – trying to find loopholes for some extra edge – quite simply, you’re doing it wrong.”

While some or many may consider use of stinger suits wrong and flirting the line in trying to find loopholes for some extra edge, we view use stinger suits are reasonable forms of protection against possible dangers that can, literally, kill a swimmer. Almost without exception, stinger suits are not used in channels, lakes or rivers where there is a low possibility of a venomous jellyfish sting that can lead to convulsions and paralysis. That is, most people who swim in the English Channel, Catalina Channel or Lake Zurich will never encounter a powerful sting of a box jellyfish or Portuguese man o war.

So why do swimmers even consider use of a stinger suit? Human safety. Plain and simple.

While the Lion’s Mane jellyfish – certainly no friend to a marathon swimmer – is one example that have stung many North Channel swimmers endlessly and relentlessly over the history of swimming in the waters around Ireland, and these swimmers have courageously continued swimming, it only takes one tiny barb from a box jellyfish in the Caribbean or one tentacle from a stinger in Australia to immediately (i.e., within tenths of a second) send a swimmer into shock and paralysis. With this kind of possibility, we believe it is prudent for swimmers in areas where there are known venomous jellyfish and precedents of swimmers being paralyzed that protective swimwear such as stinger suits are allowed and, indeed, encouraged.

Is it an enhancement? Protective swimwear is usually porous and creates tremendous drag for the swimmer. So it certainly does not help the speed of a swimmer and directly leads to a swimmer demonstrating greater strength and stamina. But protective swimwear is, in the opinion of 50% of those who took the survey – an enhancement. From that perspective, they are correct if only because no human can realistically take a sting from a box jellyfish and continue on. If protective swimwear helps the athlete achieve success where it was not possible without, then it can be consider an enhancement. That is, without this form of skin protection, it is unlikely (we predict impossible) for swimmers to complete their swims after being stung by box jellies. In fact, 100% of the swimmers need immediate medical assistance after calling out for help with blood-curling screams of pain. Those barbs are practically a stop sign of the sea.

We hate seeing any human in such pain and fear that immediate help of a swimmer just stung by a box jelly could lead to horrific consequences. Hence, our opinion that falls on the side of safety and does not question the use of protective swimwear where box jellies and stingers are known to exist. But, of course, these opinions are merely personal opinions. What we found most valuable was Morrison’s summary and analyses of the information collected. It was a job expertly planned and professionally completed.

Now it will be interesting to see if any governing body in the sport of marathon swimming will take these results and change their rules based on the collective voice of the community.