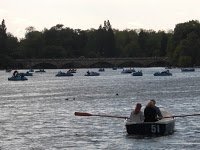 After an Australian protester interrupted the 158th Oxford and Cambridge Boat Race on the River Thames, the importance of security for the upcoming London Olympic Games was brought to the forefront.

But the local authorities and the British government have been planning for protest possibilities and terrorism threats ever since their Olympic bid was being considered.

As brethren in the open water, the rowers have the same mindset of open water swimmers: David Nelson, who captained the victorious Cambridge team, said, “We’ve said all the way through the campaign to expect the unexpected.” Oxford boat club president Karl Hudspith describe the loss, “My team went through seven months of hell. This was the culmination of our careers and you took it from us.”

William Zeng of the Oxford crew wrote online, “[The protester was] protesting the right of 17 young men and one woman to compete fairly and honourably, to demonstrate their hard work and desire in a proud tradition. You were protesting their right to devote years of their lives, their friendships, and their souls to the fair pursuits of the joys and the hardships of sport.”

With an estimated 204 countries sending 10,500 athletes participating in 302 events in 26 sports from July 27th to August 12th, the possibilities and contingencies that the London Organising Committee of the Olympic and Paralympic Games must prepare for is mind-boggling – especially for those sports like open water swimming, marathon run, cycling and triathlon that will be conducted in public areas open to anyone.

British Olympic Association chairman Colin Moynihan said, “[Incidents like at the Boat Race] are likely to be someone similar to the idiot yesterday who causes major disruption. That is why all the security measures need to be put in place to minimise the chance of that happening. You can never completely remove it but you can do everything possible to protect the interests of the athletes by minimising it. The British government and the London Olympic Organising Committee had been aware of the security challenges since day one and were looking at every conceivable scenario. It’s not impossible but it is a major challenge.”

he said.Copyright © 2012 by Open Water Source

Tags: London Organising Committee of the Olympic and Paralympic Games