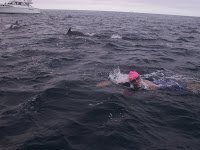 Throughout marathon swimming history from Matthew Webb in 1875 to Philip Rush in 1986, men have proven themselves to be incredible marathon swimmers.

Abou-Heif, Claudio Plit, Cliff Lumsdon, John Kinsella, Kevin Murphy, Paul Asmuth, have all proven themselves. And the list goes on and on.

But the female gender is also equally remarkable. Greta Andersen, Lynne Cox, Penny Dean, Alison Streeter, Shelley Taylor-Smith – and many others – have also gone beyond the realm of the normal.

One such woman Penny Palfrey will push herself to the outer limits this month when she attempts to swim 72 miles from the island of Oahu to the island of Kauai, two tiny dots of terra firma in the middle of the Pacific Ocean. The swim may take Penny anywhere from 30-40 hours.

Penny explained what she is doing to train her body in order to swim in the open ocean for nearly two days straight. This was her very interesting answer:

“No, I’m not doing anything special to stay up for 30-40 hours. I think if I try to stay up for long periods of time, I’ll probably get run down and expose myself to potential sickness with my heavy workload. I have no idea how I’ll stay awake for so long or how it will affect me.”

“Men are practical and it’s not practical to stay up for so long, but women are great believers. Even if the matter isn’t practical, we tend not to give up too easily and use patience and determination to work things through.”

“I hope my past will help me with this one. I’ve worked nights from 8 pm to 4 am. I’ve had many years of early mornings for swim training, raised three children with the usual dose of sleepless nights and taken several long flights across the globe where I generally get very little or no sleep. My swim from Santa Barbara Island [to the California mainland] commenced at 6 pm after a 5-hour boat trip to the Island where I swam through to 12 noon. Then I showered, changed and went out for dinner with my crew. For the San Miguel swim, we motored for 16 hours to get to the Island before an 11 hour and 30 minute swim to the California shore and for Christmas, we got a Labrador puppy who likes to wake between midnight and 3 am and bark for several hours. I’m sure she’s trying to assist in my swim preparation.”