Queens Of The Sea Take To The King Of The Bay 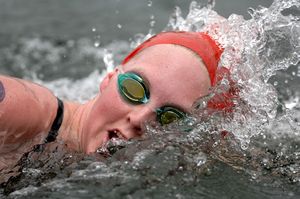 2009 world 5 km champion Australian Melissa Gorman finds herself uncharacteristically in sixth place going into the final race at the New Zealand Ocean Swim Series. But she does not intend to stay in that position. Especially with $20,000 on the line.

If Gorman wins the 2.8 km State King of the Bays event this Saturday, the 2008 and 2012 Olympian and Commonwealth Games medalist will overtake the competition and defend her series title from 2012.

“The motivation of winning that money is massive. $20,000 will make such a difference and help me out a lot with my training and overseas travel plans, so I’d love to have a good race this weekend.”

The final round of the 6-race State New Zealand Ocean Swim Series goes from Milford Beach to Takapuna Beach. The best open water swimming talent from both sides of the Tasman have been going at one another throughout the summer in the Southern Hemisphere.

“It’s all set up for fantastic finish,” said event director Scott Rice. “The field for the King of the Bays will be the strongest it’s been, with thrilling conclusions in both the men’s and women’s series.” Even with Charlotte Webby and Cara Baker out in the lead, the 20 Grand is still up for grabs. Because points from just three of the six races count, and because double points are given in the finale at the King of the Bays, the final standings will be markedly different to what the currently are.

In addition to the points leaders shown below, 1,600 swimmers will take to the water in the race’s 10th anniversary.