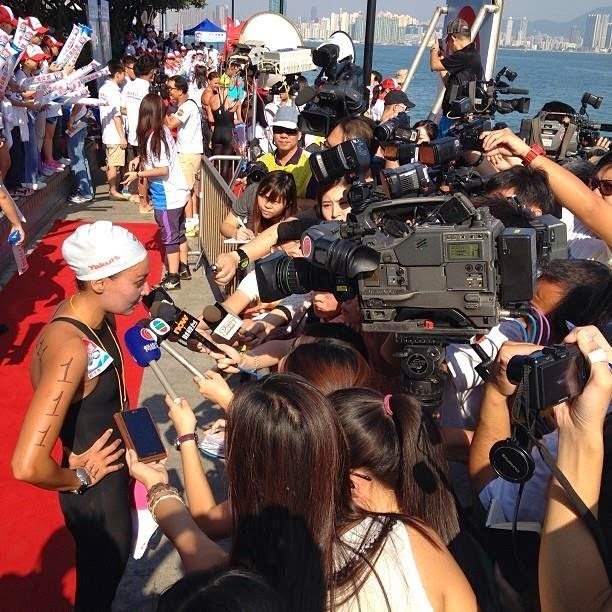 Now that the qualification procedures and events have been formally decided by the International Olympic Committee (see here), we ponder the following questions:

1. Will the course be 4 loops or 6 loops in the Atlantic Ocean course off the shores of Copacabana Beach?
2. Will the conditions of Copacabana Beach be rough and wavy or calm and smooth? 3. Who will serve as head referees during the Olympic 10K Marathon Swim?
4. Where will the feeding pontoons be set, especially if the surf is up and the winds are blowing? 5. How many hundreds of thousands of fans will flock to Copacabana Beach to watch? 100,000? 200,000? 300,000 or more?

1. How much pressure is going to be on Poliana Okimoto (see above) and Ana Marcela Cunha?
2. How much motivation will be on Keri-Anne Payne to get back on the podium?
3. What American women will qualify: Haley Anderson, Ashley Twichell, Emily Brunemann, Eva Fabian, Christine Jennings, Tristin Baxter or someone else?
4. Will Éva Risztov defend her Olympic gold or will Anna Olasz carry the mantel of Hungarian swimming in Copacabana Beach – or will they go 1-2?
6. Will 40-year-old Angela Maurer finally find her way on the Olympic podium?

1. Will anyone come up to challenge defending champion Ous Mellouli?
2. How many open water competitions will Mellouli compete in before 2016?
3. Will Benjamin Schulte of Guam come back and make his second Olympics?
4. How happy will Chris Bryan make Irish fans if he medals in Rio de Janeiro?
5. Will Daniel Fogg become the second British man to medal in the Olympic marathon swim?
6. Will Spyridon Gianniotis peak on race day and finally win a coveted Olympic medal?