Quinn Swims His Way Into The Hearts Of Many 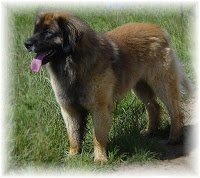 4-year-old Quinn, a 155-pound Leonberger, roams the halls and rooms of the Baylor Charles A. Sammons Cancer Center in Dallas, Texas bringing joy and hope to people facing devastating diagnoses. On the weekend, he also swims and occasionally swims alongside Olympians helping raise thousands of dollars for cancer research.

When the energetic therapy dog isn’t doing his job in the Cancer Center, he may be swimming. With uniquely webbed feet, Quinn’s genes and body are well-suited for the water. “We keep him on a long leash when he’s in the water, otherwise we’d never get him out,” said Peggy Walker, Quinn’s owner and handler.

For the past 3 years, Quinn has been working with cancer patients. “The patients here just love him,” said Linda Marler, director of the service animal training program at Baylor Health Care System. “They are sometimes startled by how big he is, but are won over by his sweet disposition. He has a great calming effect on the patients he visits.”

Last year, Quinn raised more than US$4,000 in one week for Swim Across America’s inaugural open water swim at Lake Ray Hubbard outside of Dallas, Texas where he joined 224 other swimmers including 13 former Olympians. A multi-talented canine, he raised the money through an online fundraising page that helped fund the new Innovative Clinical Trials Center at Baylor Sammons Cancer Center.