Race for the Conch Eco-Swim 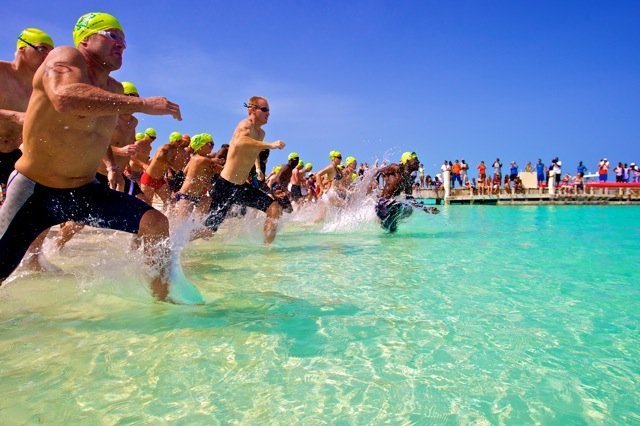 The “Race for the Conch” Eco-Sea Swim took place in the crystal-clear turquoise waters of Grace Bay on the island of Providenciales in Turks & Caicos. It is the third race in the West Indies Swim Series that also includes open water races in Nevis, St. John (USVI), and Trinidad.”

Big red starfish, huge conch shells, and eagle rays gliding along the sea floor distracted visitors, but not the locals who are accustomed to swimming in the natural aquarium.

The event offered 100m, 1-mile and 2.4-mile swims that were started by the distinct blowing of a conch shell.

Awards were locally carved and polished conch shells distributed at sunset on the beach followed by a beach party with local music.

Dan Redmond, a local from the United Kingdom stormed in at 20:28 to take first in the 1-mile race followed by Clay Britt and Eric Erenstoft.

The women’s 1-mile race was tight as American Ann Lobello ran across the finish arch in 27:03 to take first, edging out Kerin Crockett by two seconds. Providenciales resident from the UK Nicola Jordan, took third.

In the creative twist, the 1 mile Resort Cup where 3-person teams from the island hotels compete for their own special conch trophy. Regent Palms had the fastest time to win for the second straight year.

Race directors Ben Stubenberg and Chloe Zimmermann pointed out how gratifying it is to get repeat swimmers from the US, Canada and other parts of the Caribbean as well as see a strong showing by locals. “It’s especially fun to have tourists discover the race after arriving on vacation and signing up on the beach on race day.”

This year the race committee sponsored the participation of two Haitian fire fighters for the 1-mile race. It was the first time anyone from Haiti has swum in an organized open water competition. Stubenberg and Zimmermann are committed to improving swimming capabilities of Haitians, particularly among firefighters to support marine rescue operations.

The next “Race for the Conch” is July 6th, 2013. Fore more information on the event and their programs, visit www.ecoseaswim.com.