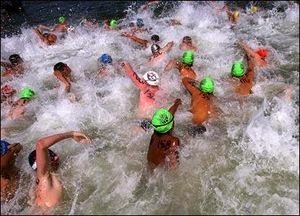 Although only 4 athletes will be impacted, USA Swimming decided that the winner of each of the 4 Zone Open Water 5 km competitions will qualify for the 2015 USA Swimming National Open Water Championship 5 km race.

Previously, the qualifying standards for the open water swimming nationals were based on either 1500m freestyle done in a pool or placement in a FINA 10K Marathon Swimming World Cup event.

USA Swimming Open Water Program Manager Bryce Elser explains, “This qualifying standard change will apply to 2015 Nationals. The Zone Champion in the event of 5 km or greater will gain automatic qualification to the 2015 5 km Open Water Nationals. This was approved by Open Water Development Committee and will be applied to the time standards for 2015.”

Robert Burgholzer, race director for the Ben Hair Memorial Open Water Meet in Lake Anna, Virginia, believes this is a well-reasoned change. “This is a fantastic development for many reasons. It places open water performance as at least as important as pool performance for determining an athletes merits in open water racing. It also gives a distance-specific qualifying opportunity. With the pool standards USA Swimming was using, a performance in a 14-16 minute race was used to predict their performance for a 50-60 minute race. Innate abilities, not to mention training, can make that prediction very inaccurate, potentially eliminating athletes who are better trained, or physiologically better suited to the race.