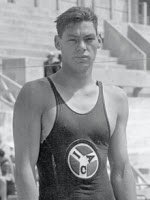 The New York Times published an intriguing article and record comparison between all of the Olympic champions over history, including Nathan Adrian who won the 100-meter freestyle at the 2012 London Olympic Games (see on left).

The article is posted here.

This comparison reminds us of the digital comparison of world record holders since 1905. This virtual Swim Against World Champions (see here).

Photo above is of Nathan Adrian, the 2012 Olympic 100m freestyle champion.