Racing For Half A Million Dollars Across The Catalina Channel

Racing For Half A Million Dollars Across The Catalina Channel 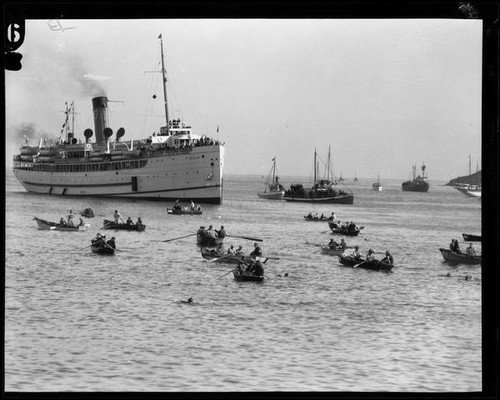 Courtesy of The Catalina Islander.

In mid-January 1927, 153 swimmers were entered in the 21-mile Wrigley Ocean Marathon Swim from Isthmus Bay on Santa Catalina Island to San Pedro, California.

The US$40,000 prize money had nearly everything to do in attracting the elite and the adventurous to the 12-15°C mid-winter water were from Southern California. The prize money would be worth US$580,732 today.

But cold did not deter the participants, they trained, tried to acclimate themselves, and set their sights on the money.

One of the swimmers was Charles Zibelman who was born without legs. At the age of 32 in 1927, he was acclimated to cold water growing up in Chicago. He believed that he had an edge over able-bodied swimmers in the Wrigley Ocean Marathon Swim. Prior to the swim, he put on a demonstration in Avalon on Catalina Island during the week of the swim. While Zimmy was confident that he could finish the crossing, he expected a 25-hour swim.

In August 1926, Clarabelle Barrett had dreams of becoming the first woman to complete a crossing of the English Channel. She came within a few miles of the British coast, swimming for 22 hours, but she became lost in a dense fog unable to finish. She competed in addition to training young 19-year-old Ethel Hertle for the race.

The Wrigley Ocean Marathon was established by William Wrigley Jr. primarily to stimulate a greater interest in swimming as a national sport. The 153 swimmers certainly helped him achieve that goal:

With the water at the start at 56°F (13°C), it was understandable that there would be few finishers. Some of the 13 women who dropped out before the start included Pauline Jackson, Miss Ellen Ray of New York, Lottie Mayer, Mrs. Alma Moore, Pearl Purdy Irland, Marjorie Williamson, Mary Mabery, Thelma Barr, Loretta Rush. But others withdrew a few minutes after the race start according to the contemporary reports from the Los Angeles Times. This included Martin Ferris, Eugene Stoppey, Emil Vodjansky, and Walter C. Wulff.

Of the 102 who entered the water (out of the 153 registered), Phillip Moore was the first person to quite dropping out at 11:43 am, 22 minutes after the start. He was followed by Hartley Caldwell, Clarence Houser, C. L. Webster all within the next 5 minutes. Then Jack Craig was pulled at 11:55 am.

By early afternoon, the fog had lifted as is normal. After 2 hours 19 minutes and approximately 3 miles out from Catalina Island, B. W. Summers remained in first with Norman Ross second, George Young third, Pete Meyers fourth, and Gene Jordan fifth followed by Charlotte Schoemmell who along with Saga Kolb and Jean McKenzie wore nothing but black axle grease. Interestingly, two English Channel veterans took a different strategy. Charles Toth waited 15 minutes after the start to enter the water and Henry Sullivan swam breaststroke.

Gene Jordan, who had come within 3 miles of completing the Catalina Channel in 1926, was near the lead, but then got out due to seasickness in the Pacific that was slightly choppy.

Carleton Adler, Bert Coleman and Pete Meyer each swam into the lead during the first two hours, but it was Olympic champion Ross and eventual winner Young who both swam comfortably and strategically early on.