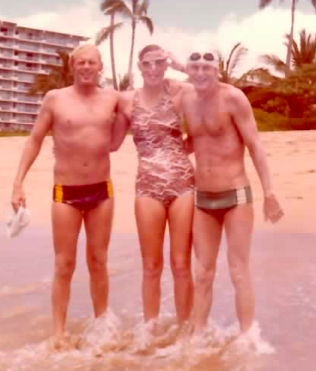 Bob Justman, Judy Collins, and Bob Luce completed one of the early Maui Channel crossings when fewer than 10 people had completed the 9.6-mile crossing between the islands of Lanai and Maui in Hawaii.

“I still have the album of photos from the swim that began at 7 am and ended at 1:30 am,” recalls Justman, the former president of the Waikiki Swim Club. “They are yellowing a bit. The photos are almost glued to the album, have been there for over 30 years.”

The photo on left shows Justman, Collins, and Luce standing on Maui after the 9.6-mile, 6.5-hour crossing was completed on Mother’s Day 1977.
“Our timer and chief shark-spotter at the time was my husband John [Collins],” remembers Collins.