Railroading Along The Wall, Rough Water At Its Best 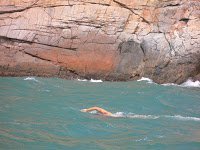 The Wall is a welcomed challenge to open water swimmers and triathletes in Hong Kong. One of the unique features of the Cold Half and Clean Half extreme marathon swims on Hong Kong Island, when the ocean swells are pumping, it presents a great body surfing opportunity for experienced watermen and waterwomen to quickly railroad their way over the course.

The Wall is an 800m section of rock wall on the Stanley Peninsula where swimmers can virtually ride the waves downwind as they swim.

The surf comes up and the waves run parallel to the cliff wall, enabling the swimmers to railroad at a speed they cannot attain with utilizing the power of the sea.

As the ocean swells build up behind and beneath the swimmer, experienced swimmers increase their kick and their stroke rate, at the same time they lengthen their arm strokes, essentially enabling them to sprint in conjunction with the power of the swells. With the incremental boost in speed from the swell’s power and direction, it is the best combination of body surfing and open water swimming. As the ocean swell passes the swimmer, they reduce their kick and stroke rate back to their normal cadence, catching their breath as they wait for the next surge of water.